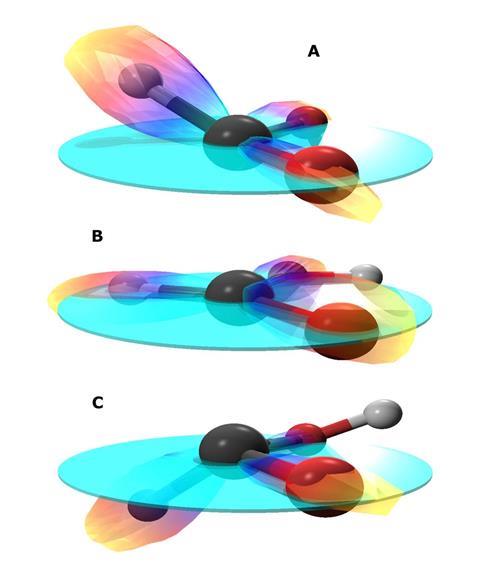 In blasting flat formic acid molecules apart with laser light, scientists in Germany have pushed atoms into chiral shapes in a way that might one day benefit chemical synthesis. Markus Schöffler from Goethe University Frankfurt and his team show that circularly polarised light can make the molecule fragment into the two possible mirror-image chiral shapes.

‘When the molecule is tilted by a few degrees with respect to the light, you make predominantly left-handed or right-handed fragments,’ Schöffler tells Chemistry World. The researchers hypothesise that before fragmenting the molecule temporarily adopts one of two mirror-image enantiomer forms.

The scientists’ technique shoots 100,000 intense laser pulses per second into a jet of molecules. The laser removes several electrons from the molecules, causing a ‘Coulomb explosion’. ‘Each multiply-charged molecule then explodes like a firework, because positively charged ions repel,’ Schöffler says.

The researchers then use an electric field to accelerate fragments towards a detector. In previous experiments, they had shown that this cold target recoil ion momentum spectroscopy (Coltrims) approach could identify a molecule’s handedness by measuring the resulting ions’ emission directions.

Now, Schöffler and colleagues explode achiral formic acid molecules using circularly polarised light, whose electric field keeps a constant magnitude but steadily rotates. Using Coltrims, the scientists use the plane containing formic acid’s two oxygen atoms as a reference. They then relate this to the angle at which the laser hits formic acid molecules and the resulting fragment positions.

When the laser hits formic acid molecules at certain specific angles, the direction the hydrogen atoms travel in suggest they were originally bent out of the molecular plane, forming an enantiomer. ‘The rotation of the electric field of circularly polarised light can be left- or right-handed,’ says Schöffler. ‘This rotation of the light influences the chirality that we finally see in the fragmentation.’

Gang Zou from the University of Science and Technology of China says that the study is ‘interesting and may be highly valuable for deeper understanding of symmetry breaking in photochemical reactions’. These finding might improve the efficiency of enantioselective chemical synthesis exploiting circularly polarised light, he adds. However, he’s concerned that the complexity of the experimental setup and the need for molecules to be in a specific orientation might limit the approach’s practical application.