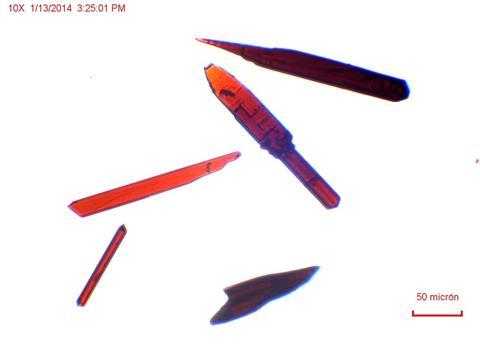 PuW2O7(OH)(H2O) crystallises as red plates; an atypical color for a Pu(III) compound

An investigation into atypically coloured crystals has provided fundamental insight into the electronic structure and bonding characteristics of actinide tungstates. Contrary to expectations, 5f orbitals do not play a part in the colours of these materials.

Understanding the colours of transition metal complexes is a staple of every undergraduate chemistry course. Ligands and their arrangement around the metal tend to dictate the colour of these complexes. Analogous knowledge on actinide compounds is lagging behind. Many of these elements are very unstable and not found in nature, which means that studying them and their compounds is only possible on small scales in specialist facilities. Recent advances in both technology and theory, however, has seen the field of actinide chemistry start to catch up.

Adding to these efforts is a team led by Thomas Albrecht-Schmitt of Florida State University, US, and Nicola Lanata of Aarhus University, Denmark, who have used a simple hydrothermal method to synthesise a collection of tungstate compounds incorporating plutonium or americium. They expected the plutonium tungstate to be purple, like other plutonium complexes, but this turned out to be dark red. Similarly, americium complexes are normally pink or yellow, yet the americium tungstate was orange. These unexpected colours led the researchers to delve deeper into the material’s electronic structures.

Albrecht-Schmitt says that while there is a lot of colour variation in transition metals, the colours of lanthanide complexes tend to stay constant as they derive from transitions between f-orbitals, which are independent of the ligands. Actinides fall somewhere between these two extremes. With these elements, there are multiple factors at play that will influence bonding and therefore colour. ‘Everybody believes that the single biggest factor in these compounds is spin–orbit coupling. But in these compounds we found that, actually, the energy of hybridisation of the 5f orbitals is larger than spin–orbit coupling. There are so many features that are on similar energy scales… and it’s very hard to make predictions because you don’t know which one is going to win out.’ The researchers concluded that contributions from the 5d orbitals on the tungsten atoms has the biggest influence on the colours.

Steve Liddle, an expert in actinide chemistry based at the University of Manchester, UK, is impressed by the results. He explains that the actinides have traditionally been thought of as a ‘lawless’ area of the periodic table. This is due to a lack of sufficient data to establish firm rules: ‘You can predict things, but unless you’ve done a study like this you never really know. Studies like this are addressing the shortfall in knowledge in the area and trying to bring it up to the rest of the periodic table.’