First experimental evidence of phi interactions in an organoactinide complex 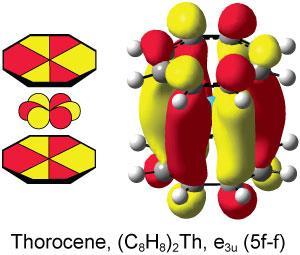 Theory had predicted the presence of ϕ interactions in actinide systems but it had never been observed experimentally, until now. Scientists in the US using high-energy x-ray spectroscopy to study the involvement of the f-orbitals in actinide sandwich complexes have experimental evidence for this unusual interaction in thorocene.

At its most basic level, bonding in actinide molecules is typically comprised of a small amount of covalent orbital mixing in the presence of overwhelming ionic attractions. However, in many cases it is proposed that these small changes in f-element covalency are responsible for profound changes in chemical reactivity and actinide properties.

Covalency is a fundamental concept used to describe how elements share electrons in chemical bonds. For the d-block transition metal series, 3d, 4d, and 5d orbitals extend well into the periphery of the atom and can interact with valence orbitals of ligand atoms to form covalent chemical bonds. In contrast, the 4f orbitals of lanthanides are very core-like and their interactions with ligands are – in general – assumed to be of comparatively little chemical consequence. The actinide elements lie between these two extremes, and the extent to which valence f and d orbitals participate in chemical bonding is a subject of debate in the community.

‘Until recently, few experimental techniques were available to provide quantitative information regarding the extent of covalent bonding for actinides in a range of oxidation states and ligand field environments,’ says Stosh Kozimor of the Los Alamos National Laboratory in New Mexico, part of the team that made the discovery. ‘Our study made use of recent advances in light source instrumentation to overcome these challenges, and we have provided a study that directly probes the actinide–carbon interaction using C K-edge x-ray absorption spectroscopy and time-dependent density functional theory.’

Kozimor explains that the ϕ interaction is unique to f-block elements: ‘it’s uncommon because s, p and d orbitals do not have three nodal planes. The increased nodality of f orbitals enables them to participate in unconventional bonding interactions.’ As well as uncovering the ϕ interaction, the team also found that covalency does not necessarily increase uniformly as the actinide series is transversed.

Steve Liddle, an actinide chemist at the University of Nottingham in the UK, says the work is impressive and elegant. ‘In recent years there have been major advances in molecular actinide chemistry, but often the inherent difficulties of experimentally corroborating computational studies in this area limit us to qualitative bonding descriptions.’

ϕThe team’s next challenge is to move from the relatively simple actinocenes to more elaborate actinide–ligand linkages. ‘Given that this team contains some very skilled synthetic chemists, I’m looking forward to finding out if they can recapture this F interaction in heavier metals by a little skilful ligand tuning,’ comments Polly Arnold, who works on unusual actinide complexes at the University of Edinburgh in the UK.