Scientists have created a photo-electrosynthetic system that allows cyanobacteria to use both light and electricity to convert carbon dioxide into acetate or ethylene. The system is more energy efficient than natural photosynthesis and opens new avenues for coupling renewable electricity to photosynthetic microorganisms to sustainably produce fuels.

Photosynthesis, which converts carbon dioxide to useful carbon-containing compounds, is one of the most important bioprocesses on earth. However, natural photosynthesis suffers from three key limitations that reduce its overall efficiency. Firstly, photosystem I and photosystem II, which absorb light and excite electrons during photosynthesis, have overlapping absorption spectra and so compete for light energy. Secondly, oxygen produced by photosystem II competes with carbon dioxide for the active site of RuBisCO, the enzyme responsible for fixing carbon dioxide. This causes photorespiration, which competes with the desired carbon fixation pathway. Thirdly, photosynthesis can only use light energy from a small region of the solar spectrum, approximately 400–700nm. 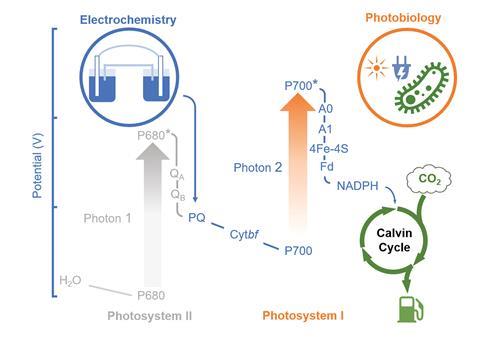 To overcome these limitations, a team of scientists lead by Jeffrey Blackburn and Wei Xiong at the National Renewable Energy Laboratory in the US, designed a system that allows cyanobacteria to use an external supply of electrons and light to drive carbon dioxide fixation. They genetically removed photosystem II from cyanobacteria and attached the modified cells to a cathode within an electrochemical circuit. Under light illumination, the externally supplied electricity acted as an artificial photosystem II by delivering electrons to photoexcited photosystem I, allowing the cells to convert carbon dioxide into fuel molecules such as acetate and ethylene. By removing photosystem II ‘we block the photosystem, which is relevant to oxygen evolution, so the photorespiration process could be inhibited,’ explains Wei. ‘At the same time, there’s only one photosystem required in our system, so there’s no competition for light absorbance.’

Renewable sources could be used to generate the electricity, so the system therefore presents a promising way to store such energy. ‘The amount of renewable energy that we’re deploying is increasing every year, but the electrons aren’t always delivered at exactly the right time that you need to use them,’ explains Blackburn. Using this strategy ‘you’re taking electrons, potentially from photovoltaics or wind, and storing that as chemical energy, using the bacteria–material interface to do that conversion for you.’ It also has the added benefit of taking a greenhouse gas, carbon dioxide, and converting it into a useful chemical product.

Shelley Minteer, an expert in bioelectrocatalysis at the University of Utah in the US, says this is a creative and innovative approach. ‘This is exciting because microbes are not really designed for electrosynthesis and so the ability to add capability into the cyanobacteria to promote chemistries of interest is great.’ And Frédéric Lemaître, a bioelectrochemistry expert at Sorbonne University in France, notes that ‘although much remains to be done,’ such as exploring different energy sources and scaling up, ‘this strategy unquestionably paves the way for future and complementary works on carbon dioxide fixation and conversion.’