Scientists in Sweden have engineered cyanobacteria that can photosynthesise the petrol substitute butanol out of carbon dioxide. The microorganisms could not only provide a way to make transportation fuels that don’t depend on fossil fuels, but they could also remove carbon dioxide already present in the atmosphere.

Lindblad’s team rewired various metabolic pathways in the cyanobacterium Synechocystis – most notably they installed a phosphoketolase pathway, which enabled them to take fixed carbon from the Calvin cycle and make it directly available for 1-butanol synthesis. This then allows for the removal of 1-butanol from the medium; which significantly increases its yield. ‘We have developed the blueprint for how cyanobacteria can be modified to produce many different compounds that have the capacity to replace fossil fuels, while also addressing the carbon dioxide that is already out there,’ explains Lindblad. ‘This has never been done before because we simply did not have the tools for it, but now we do.’ 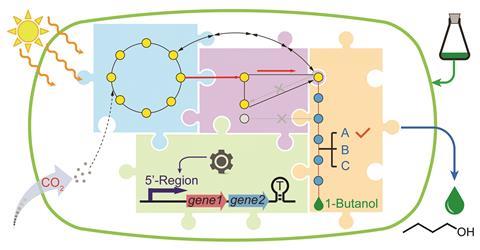 It’s not the first time that scientists have studied cyanobacteria in a biofuel context but they could only generate low volumes of product. Lindblad’s organism, however, can generate titres approaching those achieved by microorganisms fed on carbohydrates.

Bo Wang, whose research at Vanderbilt University, US, involves metabolically engineering microorganisms to produce biofuels, says the work is a step in the right direction. ‘The production of up to 4.8 gram per litre of n-butanol directly from carbon dioxide in the engineered cyanobacterium Synechocystis is an exciting imperative leap towards renewable production of gasoline substitutes. Systematic bioprocess engineering will be critical to the economic viability of the technology in the future.’

‘Using bacteria to convert carbon dioxide to a solar fuel is an exciting avenue to address energy demands in a carbon neutral way,’ comments Theresa McCormick, of Portland State University, US, whose research explores ways to store solar energy as chemical potential in transportable fuels. ‘This study demonstrates the power of modifying bacteria to increase the fuel output, which may be a key to realizing the potential of these processes.’

‘We haven’t seen the real capacity of the organism yet,’ adds Lindblad. ‘We are currently working on developments to reveal this, and increase its efficiency in producing butanol amongst other useful compounds.’