Theoretical chemists in the UK and Spain have provided a vivid demonstration of the usefulness of a quantum mechanical definition of bond order.1 Their new study draws attention to a foundational but neglected concept in chemistry in a way that will help provide a better understanding of unusual bonding.

When a chemist thinks of a covalent bond, they’re likely using the picture established over a century ago by Gilbert Lewis: two atoms sharing two electrons in a single bond, four electrons in a double bond, and so on. When scientists developed a quantum-mechanical picture of molecules in the early 20th century it led to the idea of bond order, which quantified the degree of bonding and could describe intermediate cases. An aromatic bond may have a bond order of about 1.4, for example, in between the values of 1 and 2 for idealised single and double bonds.

Unfortunately, commonly-used bond order definitions depend heavily on how the theoretician decides to describe the system’s wavefunction, leaving a gap between this important chemical idea and physical rigor. Without a strong definition, the idea of a bond order has fallen by the wayside in theoretical chemistry. ‘Although charge, or population, analysis is routinely employed to study reaction mechanisms or ground state properties, day-to-day computational studies very rarely include a bond order analysis,’ notes Eduard Matito of the Donostia International Physics Center, Spain, who has investigated these approaches.

A more rigorous definition does exist, known as a delocalisation index. This is one of several quantum chemical concepts that the wavefunction itself defines, independently of how that is described. By considering pair densities between all possible electron pairs in the system, and how they’re distributed in and between quantum-mechanically defined atoms, a delocalisation index gives a strictly defined measure of those atoms’ covalent bonding.2,3 ‘Being based on the pair density, which fully describes the quantum mechanical correlated motion of any pair of electrons, delocalisation indices are the true quantity to establish bond order,’ argues chemical bonding expert Carlo Gatti at the University of Milano, Italy. 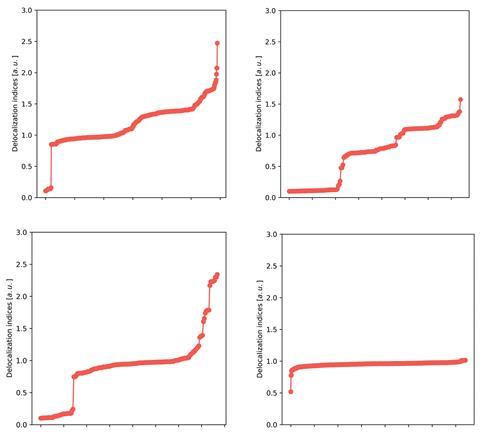 Plots showing the distribution of HF delocalisation indices for carbon–carbon (upper left), carbon–oxygen (upper right), carbon–nitrogen(lower left) and carbon–hydrogen (lower right) bonds. The presence of plateaus demonstrates the presence of remarkably stable patterns, identifiable with the classical ‘single’, ‘double’ and ‘intermediate’ pictures. In this way, Lewis’ picture can be recovered from the delocalisation indices

Although improvements in computer power mean delocalisation indices are within theoreticians’ reach, they rarely use them. ‘The germ of the delocalisation index was actually introduced as far back as 1974, but remained hidden in the specialised quantum chemical topology literature for many years. It has found more and more applications in recent times, without leaving its theoretical niche,’ explains Paul Popelier of the University of Manchester. In a new study, he and his collaborators at Manchester and the University of Oviedo make a case for their wider adoption. By investigating the delocalisation index values for bonds in a data set of 200 compounds, the researchers have explored how a delocalisation index relates to basic chemical intuition, and what it says about systems where that intuition breaks down. 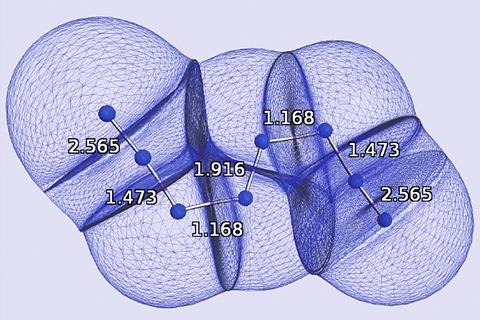 Quantum atoms appearing in the N8 molecule. The values of the delocalisation indices, one for each bond, are marked in white.

The results show that the delocalisation index values make chemical sense and correlate well with bond lengths, and cluster in groups that represent single, aromatic and double bonds. They respond to phenomena caused by a bond’s environment, like the inductive effect, as a natural consequence of how the delocalisation index is defined. On the other hand, the delocalisation index describes unusual molecules, that have been difficult to interpret, in new ways. For N8, ‘other previous explanations use ad hoc arguments, such as N–N distances and Lewis rules to build the bond orders,’ says Popelier, and these imply strongly-ionic bonds. Their new study provides a delocalisation index version of the molecule where these are strongly covalent bonds around pentavalent nitrogen.

It’s the delocalisation index’s ability to recreate chemists’ concepts of bonding on a solid theoretical footing that gives the team confidence in the new insights it provides. ‘If the original concept was useful then the new results should also be,’ says Popelier. ‘Of course, as in that case, confirmation of the utility of the new ideas will be the final judge,’ he adds. ‘The delocalisation indices provide the framework to extend the classical simplistic model and provide a more reliable picture of the actual electron distribution in the molecule,’ notes Matito. ‘The classical “two electron pairs picture in an ethylene C=C bond” is probably just a simplification, a simplistic model of a more complex reality.’

The team is still exploring the delocalisation index’s conceptual implications, and will use those results to understand other chemical systems. Traditional bond order definitions, for example, serve molecules with a high degree of electron correlation particularly poorly. While that work continues, researchers like Gatti are optimistic that Popelier‘s study will ensure the delocalisation index gets the recognition it deserves: ‘The work offers a truly cogent story to convert all chemists and physicists to this practice.’