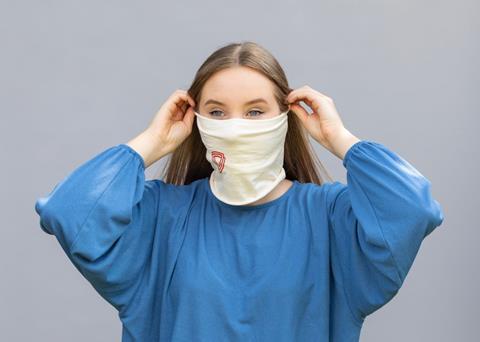 Before the pandemic, Hyo-Jick Choi was finding industry had little interest in his pitches for antiviral facemasks. He says they were more interested in finding new colours or softer, more comfortable fabrics. ‘The main driving force for the industry was how to use the cheapest materials,’ says Choi, a chemical and biomolecular engineer at the University of Alberta in Canada. ‘When I brought the issue of an antiviral or antibacterial mask for respirators, they seemed to think that this was an issue for the future.’ It seems the future has now arrived.

Since March there has been a mixed message on wearing face masks in public. Adverts by two companies who claimed they could prevent the spread of coronavirus were banned by the UK’s Advertising Standards Authority for being misleading and alarmist. But current UK government guidelines in England now state that face covering should be worn on public transport and in some shops. These should not be confused with the surgical respirators needed by healthcare workers. Particulate-filtering masks classified as N95 filters at least 95% of airborne particles. To be designated as N95, masks need approval from the US National Institute for Occupational Safety and Health (NIOSH) and European Committee for Standardization (CEN) and clearance as medical devices by the respective regulators. 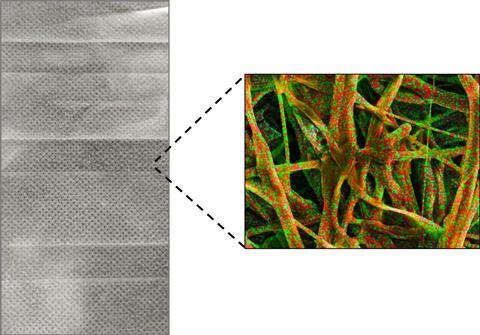 Developed by Hyo-Jick Choi, salt coatings on a fibre surface dissolve upon exposure to virus aerosols and recrystallise during drying, destroying pathogens

For those developing both types of masks, it has been a busy time. Chemist and inventor, Simon McMaster’s Nottingham, UK-based smart textiles company Footfalls & Heartbeats found a huge demand for non-medical masks. ’I started thinking we would sell 500 over a couple of weeks and to date we’ve sold about 3000,’ he says. His knitted smart textiles use nanoscale interactions within the textile to make the fabric itself a sensor. He was developing the technology for smart leg ulcers bandages, but within days, produced a mask, using zinc oxide coated antibacterial yarn (although this has not been specifically tested against the coronavirus, there is some evidence zinc oxide can inhibit influenza). McMaster is clear that ‘the masks are in no way medical’, but he does have an idea to use his technology to create masks that can sense breathing rates for home monitoring patients.

One company that has been manufacturing protective face coverings for several years is Virustatic Shield, which produces an antiviral snood originally marketed in 2018 to protect against influenza viruses. The fabric is coated with lactoferrin, a glycoprotein that mimics the sticky carbohydrates on oesophagus and nasal passage cells. In experiments, the textile captured up to 98% of viral particles in airborne droplets, although those tests did not include the specific Sars-CoV-2 virion that causes Covid-19.

Virustatic thinks their product could have value in a medical setting, but it is currently not classified for such usage. At the end of May, the British Safety Industry Federation confirmed Virustatic Shield’s classification as a face covering but there are currently no standard tests or regulation for this, although they are looking to establish one.

Medical respirators are regulated, making their development a much more complex process. Current respirators can filter efficiently, Choi says, but ‘the virus can survive for many days … so that increases the chance of contact transmission’. His idea is to modify the surface of the masks fibrous filtration layer with a simple salt film – potassium chloride or sulfate. ‘By functionalising the surface of the filters using the salt crystals, when virus carrying droplet sit on it, the salt will dissolve and then [as the water] rapidly evaporates the recrystallisation of the salt will destroy the virus physically,’ explains Choi. The method, developed in 2017, has been shown to work with viruses that have an envelope.1

Choi’s spin out company is making a prototype but rather than designing a new respirator filter from scratch they have decided to create a cover for the less dense outer filter layer. ‘We wanted to develop a material that can be easily used for current respirators without changing the process.’

Another solution comes from Chandan Sen, a surgeon and director of the Indiana Center for Regenerative Medicine and Engineering at Indiana University. Sen has commercialised an electroceutical wound healing dressing, through spin out company, Vomaris. These are made from a textile geometrically patterned with zinc and silver particles. When wet, a voltage is created, which disrupts bacterial biofilms and makes even resistant bacteria vulnerable to antibiotics. 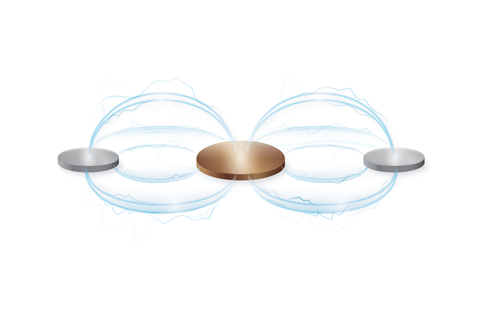 Textiles made by Vomaris have are embedded with silver and zinc. When in direct contact with a conductive medium, reactions transfer electrons from the zinc to the silver. This generates a weak electric field that can destabilise viruses

With the outbreak of Covid-19, Sen says they returned to the lab to study whether the textile could impact the virus, given that electrostatic forces play a role in viral attachment. Using the porcine coronavirus they have reported in a preprint that it does cause inactivation.2 Vomaris is now developing respirator masks that have both N95 filtration and their protective fabric and are also considering creating PPE gowns, which would need to be powered by a small 1.5V battery.

Their mask is currently being considered by the US Food and Drug Administration (FDA), which is operating a fast-tracking emergency use authorisation process for equipment that may be helpful during the pandemic. ‘The FDA has come up with a new process. Everything is going through [fast] but still [with] rigorous vetting and we will have to comply with their requirements,’ explains Sen.

Before the pandemic the cost of protective equipment had always been the key issue. ‘There was always a race to the bottom, but if you think about the overall cost to the NHS, paying for a few innovations might have saved everybody a bit of money,’ says McMaster. Although given the large amounts of protective equipment needed, cost is still an issue. Choi says he has calculated his additional antiviral cover will increase manufacturing costs by an extra $0.67 (£0.53) which he says is ‘quite economical.’

‘I think in general, there’ll be a much larger awareness at the public level of infection, and I hope that makes us better prepared for the future … this is not something that is transient, we will have to learn to live with it,’ argues Sen.

Correction: The article previously stated that the antiviral coating for Virustatic Shield was developed by University of Manchester chemist Sabine Flitsch. The article was updated on 3 June 2020 to remove this sentence and to clarify that the coating was originally designed to target influenza viruses.