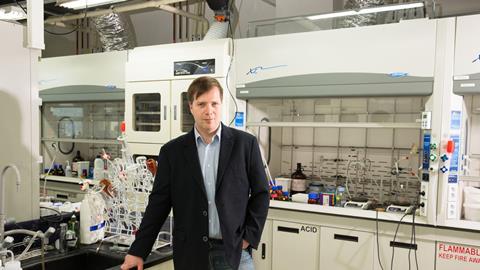 Bartosz Grzybowski, a developer of the retrosynthesis planning software Chematica, had been in the US for 25 years before moving to South Korea five years ago to become a chemistry professor at the Ulsan National Institute of Science and Technology (UNIST). There, he oversees a lab with more than 20 scientists, as well as another lab of about 15 at the Polish Academy of Sciences in Warsaw. His research has remained remarkably stable during this volatile period.

The peak of the Covid-19 epidemic in South Korea was in late February, when there were about 900 new cases every day. At the time, UNIST required that research labs only have 30% of their workforce in a research lab at one time, so Grzybowski had to scale down so that there were usually about six people in his lab at any given time, with researchers working different hours to avoid too much overlap. The lab, which focuses mainly on materials and systems chemistry, remained at that lower capacity for only about three weeks.

‘We managed to continue our work. It is actually quite spectacular that we managed to do that without too much harm to the research – nothing came to a complete standstill,’ Grzybowski says, noting that his colleagues and collaborators in the US and Europe have been hit much harder.

‘Now, we have about 25 or 30 cases a day, and the country is back to normal,’ he tells Chemistry World. There were over 10,600 confirmed Covid-19 infections and 237 associated deaths in South Korea as of 21 April, according to the Korean Centers for Disease Control and Prevention.

Grzybowski who is also a group leader at the South Korean government-funded Institute for Basic Science, credits the government’s enormous high-tech contact tracing effort for helping the country withstand the pandemic better than most others. ‘They were very aggressive in tracking down people who might have come in contact with an infected person – by credit cards, cell phones, city cameras and AI recognition,’ he explains. ‘These were things that people in the West would rebel against because of privacy concerns, but here people understood that this was for the benefit of the entire society.’

Each day when Grzybowski arrives at work, an email from the university awaits him with anonymised information about every new Covid-19 patient in the area, including a map and timeline of their recent locations. This data, which he suspects is provided by the city, enables him to assess whether he was near somebody with the virus. The government also proactively reaches out to those identified as having been in close proximity to such patients, testing them for the virus and placing them in self-isolation until the test results come back.

The situation is not entirely dissimilar at his lab in Poland, which focuses on chemoinformatics and artificial intelligence. There, about half of the team is working from home. ‘It is easier at the Polish lab because we mostly do theoretical work, so you can still work at full capacity at some remote location,’ he says. ‘All we need is access to computers.’

In the Warsaw lab, people wear masks and keep their social distance, Grzybowski says. He and other lab directors were urged to decrease the number of people working per square metre, and he complied. Much like in South Korea, Grzybowski says that these measures have ‘not been very detrimental’ to research progress.

Grzybowski usually travels to Poland every five or six weeks for work, but his last visit was more than two months ago. He hopes to be able to return to Poland in June or July, and to combine that trip with a European vacation.

Meanwhile, normality is returning to South Korea. Restaurants and bars are open, but courses at UNIST remain online-only, as do classes at the local American school that Grzybowski’s 11-year-old son attends. A mild lockdown is still in place, and Grzybowski only leaves the apartment for work or, occasionally, to play tennis. He feels fairly safe because he’s based in a remote area.

‘We are kind of secluded, in a beautiful part of Ulsan in the midst of mountains, so there are not that many people from the city coming here,’ he says. ‘Normally that is boring, but now it’s great because we are social distancing by definition.’