Technique could, in theory, be used to build up a detailed picture of protein binding sites and other complex structures using NMR 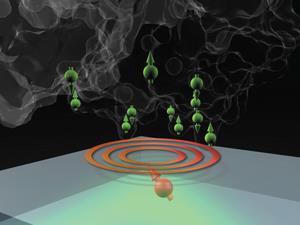 The new technique could, in principle, detect multiple nuclear spins in a single molecule

Researchers in the US have devised a novel strategy for mapping multiple nuclear spins in a single molecule using quantum sensors in diamond. The approach, which is still theoretical, would in principle allow detailed interrogation at the atomic scale of structures such as the binding sites of proteins, which are not amenable to bulk analytical methods such as x-ray crystallography or nuclear magnetic resonance imaging.

The technique relies on the unique properties of nitrogen vacancy (NV) centres in diamond, where a nitrogen atom substitutes for a carbon in the diamond lattice and which possesses an electronic quantum spin state whose characteristics can be monitored by its emission of fluorescence.

NVs can act as nanoscale magnetometers and have been shown to be able to detect single nuclear spins on the surface. However, extracting information from complex structures containing multiple nuclear spins remains a challenge.

The new strategy, says team member Paola Cappellaro, of the Massachusetts Institute of Technology, has three components. The first task is to attach the molecule under investigation to the surface of the specially prepared diamond that contains NV centres close to the surface. The electronic spin of the NV generates a strong magnetic field gradient, which engulfs the sample molecule. This has the effect of placing each of the nuclear spins of the molecule in its own unique magnetic environment, causing them to resonate slightly differently to one another.

The next task is to polarise the NV’s electronic spin using laser light energy. This polarisation ‘diffuses’ to the nearest nuclear spin of the sample molecule that has the appropriate resonant characteristics. The length of time this diffusion takes depends on the distance of the nuclear spin from the NV.

‘By alternating these tasks and using different frequencies for the polarisation the nuclear spins throughout the gradient can be pinpointed and mapped,’ says Cappellaro.

When one nuclear spin on the surface molecule becomes polarised it can in turn polarise its neighbours. Spin polarisation in this way evolves across the molecule and eventually returns to the NV. The pattern of this evolution under different resonant conditions can be used to reconstruct the relative positions of the different nuclear spins in the sample molecule. This represents the third component of the strategy. The researchers are now devising experiments to test their simulations.

Commenting on the study, Romana Schirhagl, who researches NV sensors at the University of Groningen in the Netherlands, says: ‘Diamond magnetometry has recently broken all the records in magnetic resolution when detecting the magnetic field of a single nuclear spin. This new work is taking this method to the next level by proposing a new scheme to combine the magnetic resolution with increased spatial resolution, an important requisite for generating 3D protein structures.’