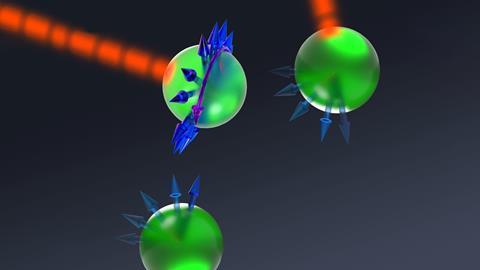 Putting a new spin on things

‘Magnetic field, electric field, temperature, pH, force and pressure – that’s basically it!’ says nitrogen-vacancy centre pioneer Jörg Wrachtrup, listing the bewildering array of variables these diamond defects have been used to sense. These defects have gone from a curiosity to potential components for a quantum computer and on to invaluable tools to analyse single molecules and living cells. Nitrogen-vacancy centres have done a lot for chemistry in recent decades – and those in the field think that there’s still a lot more they could do.

Nitrogen is the most common impurity in diamonds – others include silicon, germanium and metals such as nickel and cobalt. As a nitrogen atom has one more electron than carbon, it forms only three chemical bonds rather than four, allowing it to form a bound state with a vacancy – a point in the lattice where a carbon atom is missing. Nitrogen-vacancy centres were first identified in the 1970s. ‘[Researchers] didn’t understand what they were so much, but they classified them – that was very important work,’1 explains Ronald Walsworth of Harvard University, US. In a neutral nitrogen-vacancy centre, called an NV0 centre, four of the five unpaired electrons around the vacancy (two from the nitrogen atom, three from the p orbitals of the neighbouring carbon atoms) form pairs. This creates a system with one unpaired electron.

The NV0 centre can also absorb an extra electron from the lattice, forming an NV– centre. The NV– centre can be excited by a green photon, emitting a red photon as it decays back to the ground state. NV– centres have three possible spin sublevels, one of which radiates more strongly than the other two. Around 2000, Fedor Jelezko, Wrachtrup and colleagues at the University of Stuttgart in Germany showed that the spin states of individual NV– centres could be measured and manipulated by light, even under ambient conditions.2 ‘There are two defects in diamond, and one or two defects in silicon carbide [with this property],’ explains Wrachtrup. ‘All the other materials and molecules we’ve looked at don’t show any kind of optical spin signature.’ This led to research that continues today in using NV– centres for quantum optics and quantum information. 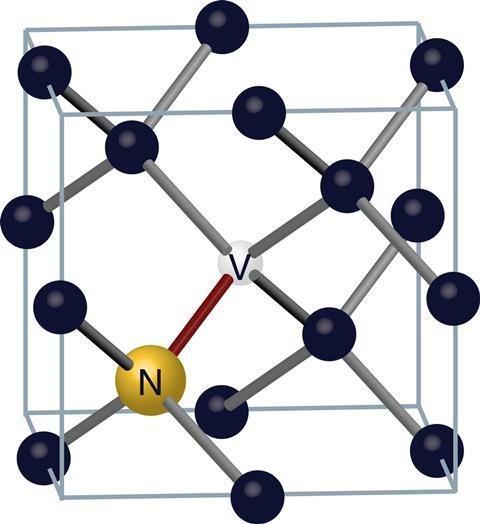 In a nitrogen-vacancy centre a carbon in diamond has been replaced with a nitrogen. This leaves a ‘hole’ with electronic properties that can be exploited to sense a huge range of different phenomena

A leader in this field is Walsworth’s Harvard colleague Mikhail Lukin. Walsworth explains how discussions with Lukin and other colleagues including Dmitry Budker and Amir Yacoby led to a simple but very fruitful idea: ’People knew that NV– centres had magnetic field sensitivity,’ he says. ‘It was a thing you had to correct for in your quantum optics experiments. If you don’t get your fields just right your annoyingly sensitive NVs won’t let you do the thing you want to do. We thought “Let’s turn it around – if you have this thing that’s so sensitive, maybe it would be a useful sensor!” It didn’t take long for us to do some back-of-the-envelope calculations and realise it could be a remarkably good sensor for many applications.’3 The Stuttgart researchers independently developed similar ideas, as did Christian Degen while a postdoc at IBM.

One crucial advantage of NV– centres, Wrachtrup explains, is that the fluorescence variation is often predictable, so it does not need calibration to the specific experiment. ’If you use other nanoscale temperature sensors like, for example, molecules, then you rely on the fact that the molecule makes a conformational change at a particular temperature – for example it unfolds or does a cis–trans isomerisation,’ he says. ‘That by itself is a very well-characterised process. However, it almost always depends very much on the environment the molecule is in. That makes these measurements highly prone to artefacts and requires careful calibration before each measurement.’ By contrast, the temperature sensitivity of the NV– centre arises purely from the thermal expansion of the diamond. ‘On the other hand, if we measure magnetic fields, the NV transition frequency’s function of the magnetic field is very well known and depends only on fundamental constants,’ says Wrachtrup.

So far the predominant applications of NV– centres have been in magnetometry. Although they are less sensitive than the very best macroscopic field sensors, NV– centres can combine very high sensitivity with atomic size – and therefore nanoscale spatial resolution. This makes them ideal for so-called nano-NMR.

Traditional NMR spectroscopy and magnetic resonance imaging or MRI use inductive coils to detect the magnetisation of the sample, but this requires a macroscopic sample to induce a sufficiently large current in the coil. This prevents detection of individual molecules. In 2014, however, Jelezko – now at the University of Ulm in Germany – and colleagues placed a diamond with artificially-implanted NV– centres in contact with silica. The predominant isotope of silicon, silicon-28, is spinless, but the researchers used their interaction with the diamond NV– centres to pinpoint the locations of four silicon-29 nuclei, which have spin ½, within the silicon dioxide lattice.4 That same year, Harvard’s Hongkun Park, working with Lukin and Walsworth, sensed and localised a single proton spin on the diamond surface.5 Together, these results reached the ultimate spatial resolution limit on NMR spectroscopy by detecting single spins.

Classical and quantum NMR detection regimes. Nanoscale NMR (middle) can detect in the region of 10,000 nuclear spins while quantum NMR can detect the spins of a few or just one nuclei

Subsequently, in 2016, the Harvard and Ulm researchers teamed up and developed a new spin detection procedure that made the technique 500 times more sensitive, and used it to detect the locations of molecules of ubiquitin – a small protein found in all plant and animal tissues – on the surface of diamonds.6 They are looking to push the sensitivity even further. ‘We detected the molecule as a whole: it’s there or not there,’ says Jelezko, ‘But to resolve the fine structure in the NMR spectrum and to resolve at least a part of the molecules’ structure from that high-resolution NMR spectrum is definitely a big challenge that will come next.’

Several papers addressing this challenge have been published in the past few months. One of the principal difficulties is that NMR spectroscopy relies on extremely precise measurement of the precession frequencies of atomic nuclei in magnetic fields to infer their chemical environment. An NV centre can measure the precession frequency only as long as its quantum state remains coherent – usually a few microseconds – and such a brief measurement of frequency inevitably has significant uncertainty. However, Jelezko’s group at Ulm University and Degen’s group at ETH Zurich in Switzerland recently published back-to-back papers7,8 unveiling a technique in which the oscillations of a single NV centre are referenced to an external clock that keeps track of time throughout the experiment. Therefore, the quantum state of an NV centre can be reset and used to measure the same frequency over and over again, before the results are stitched together to make one, effectively decoherence-free measurement.

In real-world NMR applications, however, other issues remain. First, a single NV centre can only monitor a tiny region of space, and molecules in a liquid sample diffuse freely. Wrachtrup’s Stuttgart group and colleagues in Japan recently published the first measurements achieving chemical specificity from measurements on a single NV centre in contact with 20 zeptolitre (2×10-20l) samples by using very high fields and high viscosity fluids.9 Their spectral sensitivities were far short of those achievable in classical NMR, however. Wrachtrup says that further improvements will probably depend on the development of effective ways to restrict the diffusion of molecules of liquid without distorting their NMR signals.

A second issue is that the spins in nanoscale samples fluctuate randomly, and this impedes coherent detection of the tiny NMR signal by stitching together multiple measurements. In work published simultaneously to the Ulm and ETH Zurich papers on arXiv, Walsworth’s Harvard group unveil the same technique for stitching together multiple measurements, and also extend it to larger sensors containing ensembles of NV centres.10 This allows them to monitor larger – although still tiny – samples that have a more stable bulk polarisation, albeit with a clear loss in spatial resolution. Furthermore, as a much larger region can be monitored, the effects of diffusion in and out of this region are much less significant. In multiple different samples, the researchers obtained resolutions nearly 100 times better than ever seen before in NV-centre NMR – and observed many of the crucial features used to interpret classical NMR for the first time. 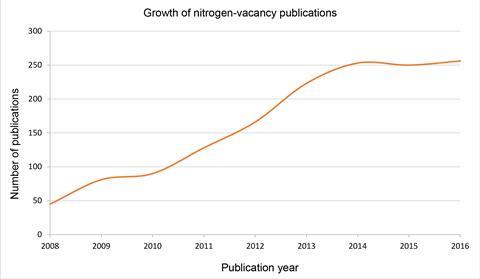 NV magnetometry has already found real applications in geophysics. Analysis of the orientations of magnetic nanoparticles in meteorites can yield information about magnetic fields during the formation of the solar system and on early Earth. NV magnetometry is also entering biophysics for mapping action potentials in neurons. 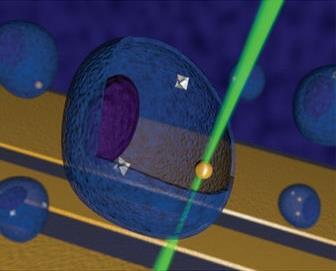 Nanodiamonds (grey) and a gold nanoparticle (yellow) within a cell. The cell can be heated by shining laser light on the gold nanoparticle, while the nitrogen-vacancy centre can accurately track how the temperature is changing within

Beyond magnetometry, various researchers have used NV– centres to perform exquisitely detailed thermometry in very tricky circumstances. In 2013, Harvard researchers led by Lukin and Park internalised both gold nanoparticles and nanodiamonds implanted with NV– centres into living cells.11 By using laser heating of the gold nanoparticles and monitoring the temperatures of NV– centres in different positions, the researchers controlled and measured temperature gradients within individual cells with millikelvin accuracy, inducing temperature differences of 5K over a distance of about 7μm. In future, the researchers suggested, such techniques could be used to kill cancer cells without damaging healthy tissue and to monitor or even control metabolic processes such as gene expression. In March 2016, researchers at the City College of New York led by physicist Carlos Meriles and biomedical engineer Sihong Wang, together with Wrachtrup, used NV-implanted nanodiamonds to identify differences between the temperature profiles of healthy cells and cancer cells.12

‘Now and in the relatively near term I think magmetometry will form the majority of the applications,’ predicts Walsworth. However, he notes, ‘There are dozens of groups using NVs as sensors in all sorts of things. You can just sit there and you’ll probably see several new papers every day. Now I just describe it as a platform technology that people can use in many different areas.’