Dinosaur mass extinction may have been triggered by acid rain

Around 65 million years ago, 71–81% of all species on Earth – including land dinosaurs – were wiped out following an asteroid impact in Southeastern Mexico. Now, Japanese scientists have carried out the most realistic laboratory simulations of the impact to date and found the extinction may have been down to acid rain, triggered by the release of sulfur trioxide when the asteroid slammed into sulfur-rich rocks. 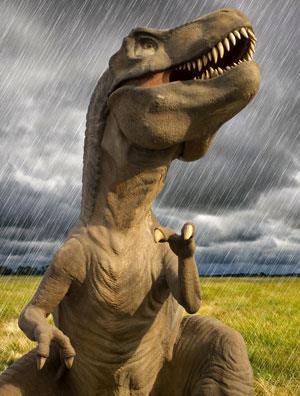 Most scientists accept the principal cause of the Cretaceous–Tertiary mass extinction was a 10km asteroid hitting the Yucatan peninsula, but the precise mechanism by which this caused the extinction remains controversial. Some think that dust and aerosols thrown up by the asteroid cooled and darkened the Earth’s surface, blocking photosynthesis and causing the death of plant life and the consequent starvation of animals.

Alternatively, oxidation of sulfur-rich minerals may have caused widespread acid rain that acidified the oceans, dissolving the calcareous skeletons of many plants and animals. This would explain the high proportion of sulfate minerals in sedimentary deposits from this time and the ‘fern spike’ – the plants that survived the catastrophe best and recolonised the Earth quickest were ferns, which grow well in acidic soil. But the usual product of sulfur oxidation is sulfur dioxide. This would have stayed in the atmosphere for several months as it converted slowly to sulfur trioxide before dissolving in water to form sulfuric acid. Rainwater would therefore have been only weakly acidic, and the drop in oceanic pH quite small.

Sohsuke Ohno and colleagues at the Chiba Institute of Technology in Japan simulated the impact as closely as possible to find out what exactly was produced. An object falling from space into the Earth’s gravitational field will be accelerated to at least 11.2km/s. The bedrock of the crater is largely anhydrite (anhydrous calcium sulfate). To make an object slam into anhydrite at over 11.2km/s, the team mounted natural anhydrite from Peru (which has the same composition as the crater bedrock, while being easier to cut) in a vacuum chamber with a chemically inert, high density tantalum metal plate backed with a plastic ablator a short distance from it.  A pulse from a high power laser turned the ablator to a plasma, and the rapid expansion caused the tantalum plate to hit the anhydrite at speeds of 13–25km/s. They sucked out the gases produced and analysed them with a mass spectrometer.

The gas contained about 100 times as much sulfur trioxide as sulfur dioxide, implying that the impact oxidised the anhydrite bedrock all the way to the sulphuric acid precursor. Sediment from this period suggests the impact threw up masses of quite large silicate dust particles, which would have fallen back to Earth in the hours and days immediately following the impact. During this time, the sulfur trioxide molecules would have combined with the water vapour in the air to make sulfuric acid aerosols. The group’s theoretical calculations suggest that these would nucleate around the silicate dust particles to create raindrops with around 0.2mol/dm3 sulfuric acid, giving them a pH of 0–1. Such highly acidic rainfall would cause a drastic drop in oceanic and soil pH and could explain the observed extinctions better than global darkening, says Ohno. ‘The components of the sedimentary boundary layer have large particles, not small particles,’ he explains. ‘Such large particles must fall down to the ground within one month, so it’s difficult to block the sunlight for a long time.’

Vivi Vajda, a palaeontologist at Lund University in Sweden, says: ‘They show the first robust evidence that sulfur trioxide played a major role in the acidification of the oceans following this impact.’ She is less convinced that the mass extinction can be explained globally without reference to darkening, pointing out that high latitudes show no evidence of silicate particles falling to Earth, but still suffered the mass extinction. ‘It’s still other factors such as – I would imagine – darkness that have spread the extinction over the globe,’ she says.