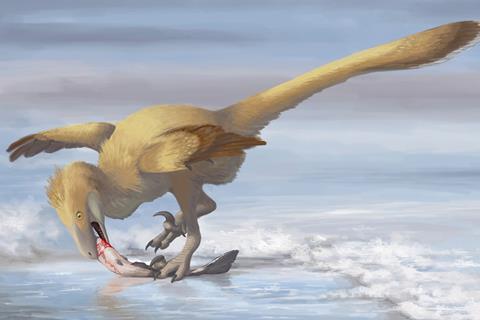 Analysing oxidative stress compounds in fossilised bones has revealed that most dinosaurs, including giant sauropods and theropods like Tyrannosaurus rex, were warm-blooded like modern birds. But Stegosaurus, Triceratops and hadrosaurs likely reverted to reptile-like cold-bloodedness.

All extinct dinosaurs were once thought of as reptile-like ectotherms, animals that operate on low metabolic rates and require environmental heat sources to increase their body temperature. Since the late 1960’s, scientists have started to find evidence that dinosaurs were active, warm-blooded animals (endotherms) more akin to birds and mammals. But whether all dinosaurs were true endotherms is still debated.

A team around Jasmina Wiemann from Yale University, US, has now measured oxidative stress biomarkers to estimate dinosaurs’ metabolic rates and thus their thermoregulation strategies. With Raman and infrared spectroscopy, the researchers searched for thioethers in 30 fossilised thigh bones. The compounds form as unwanted byproducts when cells convert oxygen into energy. Their amount scales with cells’ oxygen consumption, which is higher in endotherms than in ectotherms.

High metabolic rates indicating true endotherms were found in most dinosaurs. This includes giant sauropods that have been proposed to be gigantothermic, maintaining their body temperature through sheer size. ‘But what we realised is that within the two major groups of non-avian dinosaurs – the Ornithischians that include Stegosaurus, Triceratops and [the hadrosaurs], and the Saurischians that include Tyrannosaurus rex, [sauropods] and modern birds – there are fundamental differences in the range of metabolism that was realised, which was really unexpected,’ says Wiemann. 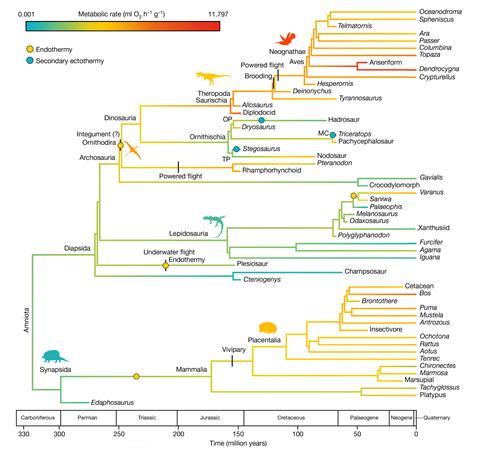 Time-scaled consensus phylogeny of fossil and modern amniotes showing the evolution of metabolic rates and thermal strategies
Silhouettes have been adapted from PhyloPic images; the pterosaur is by G. Monger (CC BY 3.0 unported https://creativecommons.org/licenses/by/3.0/) and the synapsid by M. Celeskey (CC BY 3.0 unported (https://creativecommons.org/licenses/by/3.0/)

Stegosaurus, Triceratops and duck-billed hadrosaurids seem to have reverted to metabolic rates similar to those of modern lizards and snakes. ‘It’s not contradictory at all with the literature out there, but it’s for the first time that we have more of a metabolic mechanism that drives these observations,’ Wiemann explains. T rex, it turns out, has one of the lowest metabolic rates among Saurischians, she adds. ‘It’s still warm-blooded, but it is not the active slender predator that people like to think of, it is more like a sluggish scavenger.’

‘This is a really exciting new proxy,’ says Robin Dawson, a geochemist from the University of Massachusetts, Amherst, US. ‘One of the key things that I think is appealing about [this technique] is the fact that it’s not destructive.’ Her own isotope analysis on eggshells, which showed that dinosaurs were likely endotherms, required fossils to be ground to a fine powder – not something researchers want to do with their most pristine specimen.

‘[The study] is very welcome and exciting, because it’s an entirely new approach to the question of endothermy,’ says Roger Seymour from the University of Adelaide in Australia who has studied dinosaur thermoregulation. He’s happy to see that ‘people could accept the reversal from endothermy to ectothermy’, which is what he suggests happened in crocodiles’ evolutionary past.

However, Seymour disagrees with the idea that the hadrosaur, Triceratops and Stegosaurus were ectotherms. One of the indicators the study missed is the size of the animals’ blood vessels, with larger ones supporting the higher blood flow rate needed for endothermy, he says. ‘Hadrosaurus has the biggest nutrient foramen [the tunnel in the bone containing the blood vessel] that I have ever seen, you can stick your finger into it,’ Seymour says.

‘What would be really exciting is looking at fossil localities where the climate or the environment is a little bit more extreme, where we can really see the limits of the thermoregulation of these extinct animals,’ says Dawson. By unravelling dinosaurs’ physiology, the question scientists really want to answer is how these animals dominated the Earth for so long – and why all except birds went extinct, she points out. ‘That’s going to always fascinate us.’