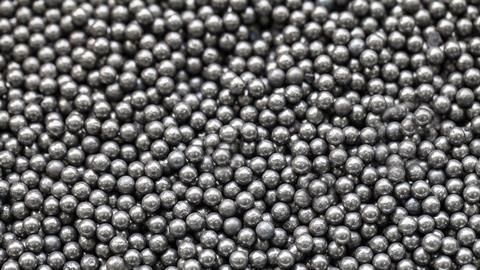 Three different crystalline forms, or polymorphs, of a compound have been reversibly transformed from one to another via mechanical grinding for the first time. The team behind the work suggest the number of attainable polymorphs could be limitless in principle, demonstrating that ball mills could offer a greener, faster and cheaper way to make products that are important for the pharmaceutical and chemical industries.

Ball milling is a common process for mechanochemical syntheses and it is expected to make chemistry more sustainable. That’s because, unlike traditional solution-based methods, it requires no heat, tiny amounts of solvent, if any, and does not produce toxic waste.

It also promises to yield new polymorphs of compounds that cannot be obtained via solution methods. As polymorphs of the same compound can have vastly different physical properties, finding new ones is important in drug discovery and pharmaceutical manufacturing.

Three polymorphs of the same material had been made using ball milling before. However, only two polymorphs had been shown to be reversibly converted from one form into the other. Now, Jeremy Sanders’ lab at the University of Cambridge, UK, has gone one step further and shown how the technique can perform one pot interconversion of three polymorphs of a disulfide compound, discovering a new polymorph in the process.

‘We expect this to be a general phenomenon,’ says Sanders. ‘We have found many compounds which display reversible polymorph conversions between two polymorphs under milling conditions. It is just a question of time before other examples with reversible conversions involving three or more polymorphs are discovered.’

The researchers focused on studying the nanocrystalline nature of milled powders and how tiny quantities of solvents and additives can subsequently affect polymorph stabilities. To do this they used a model compound – 2-nitrophenyl-4-chlorophenyl-disulfide. Previous work had shown that it could be interconverted between two polymorphs, and the team tested the effects of a variety of solvents in the milling process. 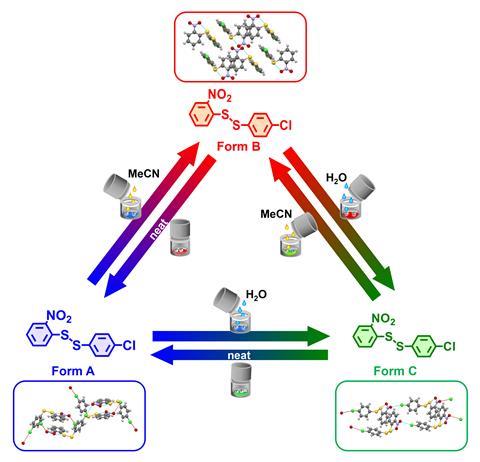 Their milling experiments revealed that specific conditions enabled each of the three polymorphs to be converted into each other. Form A was produced when form B or the newly discovered form C were milled with no added liquid solvent. Meanwhile, form B could be made from form A with the small addition of various solvents, or from form C with acetonitrile. Meanwhile, form C was made from either A or B polymorphs by adding water.

‘We had predicted that this would be the case, but because of the limitations in the technology, it took a very long time to define precisely the solvent and concentrations that would lead reliably to the three different polymorph interconversions,’ explains Sanders. ‘We find it very satisfying that we can now drive the crystal form reliably from A to B to C and vice versa.’

However, there was an intriguing and necessary requirement for the interconversion process between the three polymorphs: a tiny amount of (2-nitrophenyl)2–disulfide had to be present or added to the mix as a contaminant for each conversion to work. The team’s current hypothesis is that that the contaminant is likely acting as a template enabling the nucleation of the different polymorph crystals.

‘This is a notable contribution to the area of mechanochemical control of polymorphism,’ says Tomislav Friščić, who investigates mechanochemistry at McGill University in Canada. ‘One detail of this work is particularly captivating: the apparent role of low-abundance molecular impurities in enabling the polymorphic transformations. This is an intriguing effect that might open new opportunities for mechanochemical polymorphism control.’