A mechanochemical process could drastically reduce the amount of energy required to produce ammonia, one of the world’s most important chemical feedstocks. The reaction makes ammonia at atmospheric pressure and 45°C – significantly lower than the high pressure and hundreds of degrees needed for the Haber–Bosch process.

Ammonia is a key ingredient in fertiliser. Its production by the century-old Haber–Bosch process is responsible for around 2% of the world’s energy use. The main reason for this is the extreme conditions required to drive the reaction, with temperatures close to 500°C and 200bar of pressure.

Now, an international research team has developed a way to make ammonia that works under much milder conditions. ‘We demonstrate that ammonia can be synthesized at 45°C and 1bar via a mechanochemical method using an iron-based catalyst,’ explains Jong-Beom Baek, a chemical engineer based at Ulsan National Institute of Science and Technology, South Korea, who helped lead the project. ‘With this process the final ammonia concentration reached 82.5vol%, which is higher than the state-of-art ammonia synthesis under high temperature and pressure.’ 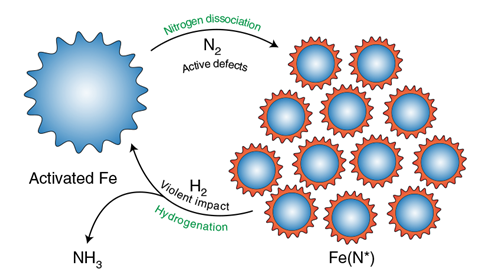 After defects on the surface of the iron particles, created by repeated collisions during ball milling, break the dinitrogen triple bond, the nitrogen atoms are hydrogenated to make ammonia

There are two key steps to the new process. First, the iron powder catalyst helps to adsorb and dissociate nitrogen molecules into atomic nitrogen. This is then followed by hydrogenation. The team explains that the repeated collisions of the iron particles create active defects that encourage nitrogen dissociation. These violent impacts during the ball-milling process also provide additional energy to help release hydrogenated species from the catalyst surface.

‘In comparison with the traditional Haber–Bosch process, our method is more suitable to produce ammonia at a small scale,’ says Baek. ‘Since the mild reaction conditions permit a simple manufacturing device configuration, our method does not need centralised reactors on a very large scale.’

‘These are quite remarkable findings,’ says Stuart James, a mechanochemistry expert from Queen’s University Belfast, UK. ‘To get this classically high-temperature, high-pressure reaction to go at lower pressures and bulk temperatures is very striking.’ However, he notes that while the bulk temperatures are low, local temperatures during the violent collisions could be much higher. James also points out that scaling up ball-mill processes is not always straightforward. ‘It would also be interesting to try techniques such as screw extrusion, which might be more scalable.’

Baek explains that the group now hopes to find even more efficient catalysts and design a device that would allow continuous ammonia production. ‘An electromagnetic-driven milling method may possibly solve the issue, because the gas charging/discharging process should be conducted after pausing the milling process,’ he explains.