A new iron-based complex to sensitise large-bandgap semiconductors in dye-sensitised solar cells has been produced by researchers in Sweden. The researchers have not produced efficient solar cells yet, but the team believes it could potentially replace precious metals currently used, dramatically increasing the cells’ scalability and reducing their cost.1 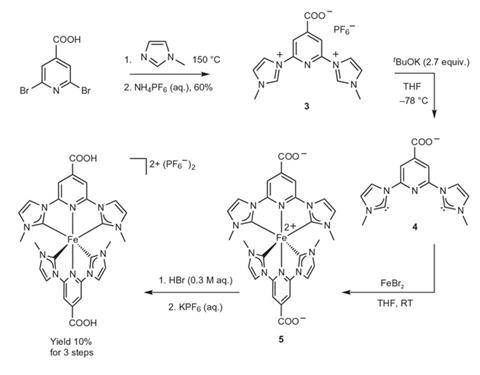 In a dye-sensitised solar cell, a semiconductor, such as titanium dioxide, with a large bandgap is made photo-active by adding a metal-centred molecular dye complex. When the dye absorbs a photon, an electron moves off the metal onto the ligands, and from there can be injected into the conduction band of the semiconductor. Polypyridine complexes of precious metals, principally ruthenium, have historically been among the most successful sensitisers, but they are among the rarest metals on earth. Directly above ruthenium in the periodic table lies iron – one of the most abundant elements on the planet and an attractive replacement. However, there is a problem: a metal-centred excited state which, in ruthenium, has a higher energy than the metal-to-ligand charge transfer (MLCT) state, has a lower energy in iron, which reduces the lifetime of the MLCT state from microseconds to femtoseconds and lowers the proportion of electrons transferred to the metal from 100% to less than 10%.

Organic chemist Kenneth Wärnmark of Lund University in Sweden and colleagues attached N-heterocyclic carbene ligands to iron, destabilising the metal-centred excited states and thereby suppressing the deactivation of the MLCT state. Using various spectroscopy techniques, they showed that the intrinsic lifetimes of the MLCT state in their dye molecule, immobilised on the surface of titanium dioxide, increased to 37 picoseconds, allowing 92% of the electrons to be injected into the conduction band of the titanium dioxide. The researchers now face another problem: preventing the electrons that have been successfully injected into the conduction band from recombining with the iron(III) cation left at the centre of the dye molecule. ‘We have injection from the same excited state as with the best ruthenium sensitisers,’ says Wärnmark. ‘That opens up the possibility of using the same tricks that have been used for ruthenium sensitisers to handle this fast recombination.’

Physical inorganic chemist James McCusker of Michigan State University, US, is impressed. ‘This paper has broken through a wall,’ he says. ‘A paper in 1998 presented the first example of an iron-based dye-sensitised solar cell2; our paper in 2000 showed why that probably wasn’t working.3 These guys have taken a really, really nice, very synthetic approach to redesign a molecule, which is one way in which you can circumvent that problem.’