Liposomes made from synthetic nucleoside phospholipids could benefit drug delivery

Researchers in China and Ireland have developed a simple way of building new stimuli-responsive phospholipids that can self-assemble into hollow spheres and trigger the release of anticancer drugs only when inside the cell lysosome.

Liposomes made from synthetic nucleoside phospholipids could benefit drug delivery

Liposomes are nanoscale three-dimensional hollow vesicles with a phospholipid-based outer shell. They are widely used as drug and gene delivery agents and have been approved for various clinical trials. Liposomes are easily internalised by cells and are sealed off from the rest of the cell by the endosome and later in the internalisation process by the lysosome. These compartments specifically isolate foreign objects from the cell and remove them. Controlled release from them can significantly enhance delivery of a therapeutic drug directly within the targeted cell. Since the internal lysosome environment is acidic, pH sensitive liposomes capable of braking up and releasing their cargo have been widely studied. Due to the covalent nature of most of the phospholipids used to prepare liposomes, the latter do not respond promptly to the acidic environment, limiting the fast release of their cargos, and require tedious covalent synthesis procedures.

Now, Xinyuan Zhu and co-workers at Shanghai Jiao Tong University and University College Dublin have constructed a new type of phospholipid in which the hydrophilic head and hydrophobic tail are bound, not covalently, but through multiple hydrogen bonds between nucleobases that have been attached to the head and tail in the lab. Similarly to base pairs in DNA and RNA, the hydrophilic and hydrophobic parts connect through moderately strong, highly directional and pH sensitive hydrogen bonds. ‘Compared to conventional covalent synthesis, recognition based on multiple hydrogen bonds is more universal and biologically relevant … and can greatly reduce the multistep chemical reactions, the purification of intermediates and the amount of waste generated,’ explains Zhu. 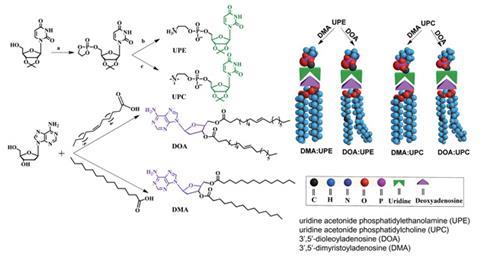 This method offers the possibility of engineering a wide variety of new synthetic phospholipids without tedious covalent synthesis. One formulation tested in vitro has encapsulated anticancer drug, doxorubicin, and delivered it to cancer cells more efficiently than standard covalent non-pH sensitive liposomes. In vivo they have demonstrated that they can increase the circulation times of the drug so that it is not expelled by the liver or kidneys as quickly as with conventional liposomes or free drug. This sustains drug release and its action against tumour cells.

Pharmacology expert Theresa Allen, from the University of Alberta, Canada, believes this to be a ‘novel and creative approach to the generation of liposomes that might more easily be made to release their contents in vivo’.

At present, engineering these new phospholipids must still be optimised and storage may be an issue, however, a new nucleoside phospholipid library can be created and expanded by varying the combination of the head and tail groups. All this will increase our understanding and expand the possible applications of these lipids in biomedicine and bioimaging.