Bacteria have been engineered to manufacture anti-cancer drugs and self-destruct to spill this cargo deep inside tumours. In combination with chemotherapy, the approach shrank a tumour in a mouse model for liver cancer more than chemotherapy alone.1 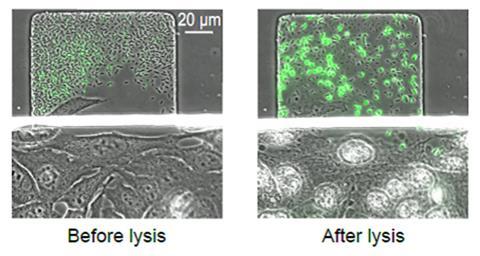 In an in vitro test, the engineered bacteria destroyed human cancer cells within three hours

To create the cancer therapy, University of California, San Diego scientists turned to Salmonella as this bacterium likes to colonise tumours as a way of hiding from the body’s immune system. The bacterium was engineered to produce the toxin haemolysin, along with a chemokine to call in the host’s own defences. A ‘kill switch’ was also designed into them that would cause the cells to break open when flipped.

When tested in a mouse model of liver cancer, the bacteria did not perform better than chemotherapy alone, but in combination there was a significant effect. ‘For the combined therapy we observed decreases in tumour size and a 50% increase in life expectancy in mice with metastatic cancer,’ says senior author Jeff Hasty. ‘Think of the bacteria as an army that enters behind enemy lines, to the interior of the tumour, which is where chemotherapy finds it hard to reach.’ The group previously reported that orally delivered engineered Escherichia coli colonise liver tumour tissue but not healthy organs.2

The simultaneous self-destruction of the bacteria is under the control of a small signalling molecule, AHL, which flows in and out of the cells. Its production is stimulated by the presence of AHL so as the bacterial colony grows levels of the molecule rise. Once the concentration of AHL passes a threshold, a protein is produced that obliterates the bacteria’s cell wall releasing its deadly cargo.

The bacteria lose their ability to deliver drugs after about 18 days, but oral administration means it is easy to take another dose. ‘We are currently modifying bacteria so that they kill any remaining bacteria from a previous dose, in addition to cancer cells, so that they wipe the slate clean,’ says Hasty.

‘This is a clever approach,’ comments Shibin Zhou, an oncologist at Johns Hopkins in Maryland, US, who wrote an accompanying perspective.3 ‘An advantage with this approach is that the bacteria synchronously lyse and so their population shrinks. That is a safety mechanism.’ This restricts the bacterial population to a defined size, which minimises the risk of an adverse systemic inflammatory response in a patient. ‘This changes our thinking about how to engineer bacteria. It is also a first and more combinations of potent therapeutics can now be tested,’ Zhou adds.