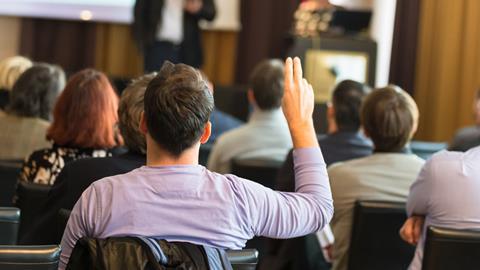 Women ask fewer questions than men at scientific conferences, even when the majority of the audience is women. That’s according to new findings from Stanford University based on data collected at the annual conferences of the American Society of Human Genetics (ASHG) and smaller Biology of Genomes meetings in the US between 2014 and 2017.

‘When women are 70% of a room, they still asked only about 40% of the questions,’ says study co-author Natalie Telis, a computational biologist who was a graduate student at Stanford when the work was conducted. Based on this data, she estimates that an audience would need to be at least 80% female before women asked the same number of questions as men.

Only 35% of the recorded questions at the ASHG meetings came from women, even though just over half of the audience at plenary talks, on average, were women. The team found that things were similar even for talks in subfields like genetic counselling and ethical, legal and societal issues (ELSI) where female researchers are in the majority. Women were predicted to make up two-thirds of ELSI audiences, based on computational modelling later validated by data from conference organisers, yet only 45% of questions were from women. Telis tells Chemistry World that the same ‘down-by-half trend’ continues down to where women are 20–30% of the participants and are asking about 15–20% of the questions.

‘This argues against a hypothesis that women are discouraged from asking questions because, as the minority, they consider themselves outsiders,’ the authors concluded. The fact that genetic counselling and ELSI have historically been dominated by women suggests that seniority alone does not drive female question-asking behaviour, the researchers surmised.

Shirley Malcom, who directs the American Association for the Advancement of Science’s education and human resources programme, agrees. ‘The issue is not just the number of men or women who are present, but the extent to which you feel comfortable in the setting – if the conversation is dominated by the men, you can still get the same situation where they do not feel empowered to ask questions.’ Malcom says the findings confirm what she has seen at scientific conferences and even at smaller committee meetings. ‘Does this happen? Absolutely – I have seen it and I have experienced it.’

Malcom notes, however, that the form of questioning – whether people lined up behind a microphone or raised their hand for an opportunity to speak – is important. In the latter scenario, she suggests, it could be that women simply aren’t being called on as often. While there were microphones in every aisle at the ASHG conferences, at Biology of Genomes conferences there were runners with mics that delivered them to people raising their hands.

Fewer women were invited to deliver scientific talks at these conferences too. Women only presented 39% of all talks at the ASHG conferences between 2014 and 2017. This effect was seen across subfields, with women consistently delivering fewer talks than expected based on their participation in poster sessions. ‘A lot of things could contribute to that – oftentimes women are more likely to be in the field, but they might be younger members of that field and may be overlooked,’ Malcom suggests.

As part of their study, the Stanford researchers shared some of their findings at a Biology of Genomes conference in 2015. ‘I publicised the statistics that we were seeing – that women were between 30% and 40% of the meeting, but asking 11% of questions,’ Telis recounts. She says the finding sparked fervent discussion that led to a new policy requiring the first question to come from students who haven’t yet got their PhD. This is a more diverse population than more senior researchers, Telis explains. The new policy had an immediate impact, and those asking questions better reflected the audience gender divide at that year’s conference.

Science suffers when a one group is not part of the conversation, warns University of Michigan chemistry professor Anne McNeil, who launched the Diversify Chemistry website in August 2018 to help conference organisers find chemists from a more diverse talent pool. ‘Think of all those ideas and gentle nudges to look at your work a different way that are not shared because women are disproportionately silent,’ she says.

McNeil says plenty can be done by universities to help address this problem. She points to decisions by some science faculty to hold off on questions until a few graduate students have had their chance first. ‘When I was at Cornell, one speaker offered $5 to the first student who asked a question,’ McNeil recalls.