Does the periodic table make more sense upside down? 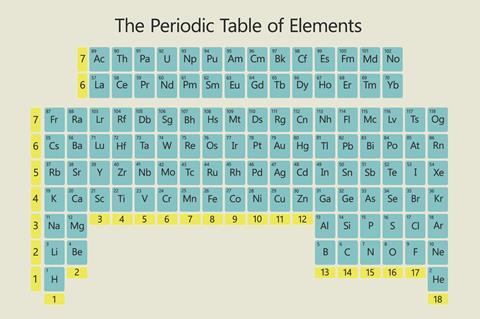 The inverted periodic table. Could it catch on in schools and universities?

A group of UK researchers has suggested introducing an inverted version of the periodic table, with heavy elements at the top and the lightest at the bottom.

In an opinion piece for the journal Nature Chemistry, a group led by the University of Nottingham’s Martyn Poliakoff says that the traditional version of the periodic table used to teach students about the chemical elements makes some concepts difficult to understand, and that a flipped arrangement of elements would be more intuitive.

‘Looking at a problem from a new viewpoint often gives rise to new ideas, so this orientation of the table will undoubtedly give us all a new perspective,’ the authors write.

They argue that displaying the table upside down makes sense in many ways. The lighter, more fundamental elements are at the base of the table, and properties such as reactivity, atomic number and atomic mass increase from bottom to top. This provides a better visual representation of the aufbau principle – which states that electrons fill up the lowest energy orbitals first.

The group showed the new design informally to a number of chemists, including a member of the relevant International Union of Pure and Applied Chemistry committee, and says it received a ‘surprisingly positive reception’. Experimental psychologists then analysed the perception of both designs by showing them to 24 non-chemists and tracking their eye movements. This revealed a slight preference for the existing periodic table, although the team point out this may just be due to familiarity. They say the next step is for the inverted table to be tested on a wider scale, and are encouraging chemistry educators to give it a go.