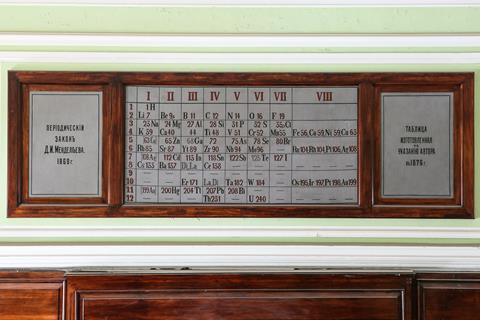 This classroom periodic table has been in use in a lecture theatre in St Petersburg State University in Russia since 1876. It is thought to have been commissioned by Dmitri Mendeleev himself

Earlier this year we reported on what was thought to be the world’s oldest classroom periodic table, a poster discovered in a storage basement at the University of St Andrews that was purchased in 1888. Now, that record has been beaten by a hand painted version, thought to have been commissioned by Mendeleev himself, displayed in a lecture theatre in the chemistry building of St Petersburg State University in Russia.

Although it isn’t a commercially printed wall chart – the St Andrews one is still thought to be the oldest of this kind still in existence – the table dates back to 1876 and has undoubtedly been used for teaching over the years. It was painted just seven years after Mendeleev came up with his system for organising the elements, using oil paints on canvas surrounded by a wooden frame. It has been restored a few times throughout its life, most recently in the early 2000s.

The painting was moved to its current location when the university constructed a new chemistry building in the early 1890s. Before then, it was likely to have hung in the main university building where Mendeleev taught. Academics at the university say they are now searching through archives of the Russian Physical and Chemical Society, which existed until 1895, to try and find out more about the painted periodic table’s history.