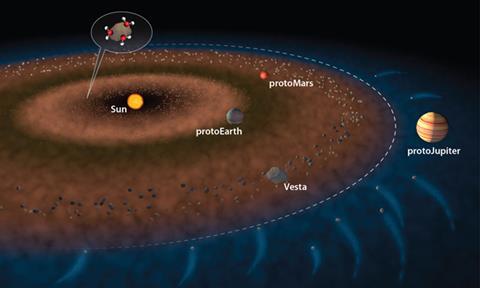 When the solar system first formed from a cloud of stellar dust, the sun emitted far more heat than it does today. As the sun cooled, elements with higher boiling points such as iron, silicon and calcium condensed first and accumulated in the planets of the inner solar system, whereas elements like hydrogen were carried further out by the solar wind.

Most experts believe the solar system’s water condensed into meteorites called carbonaceous chondrites, which then rained down upon planets delivering their cargo of water. The ratio of deuterium to hydrogen in Earth’s water is indistinguishable from that of carbonaceous chondrites, while other possible sources of water such as comets and the solar wind have different isotopic ratios. Comparing the isotopic ratios of nitrogen and carbon atoms reinforces this conclusion. This does not tell scientists when water arrived on Earth, however.

Cosmochemist Adam Sarafian of Woods Hole Oceanographic Institution in Massachusetts and colleagues looked at eucrite meteorites, which have fallen to Earth from Vesta – the largest of the rocky asteroids. These are some of the oldest igneous rocks in the solar system, having crystallised only around 14 million years after the first solid material. The team found that the deuterium to hydrogen ratio of a hydrated mineral called apatite in the eucrite meteorites was effectively the same as that in the carbonaceous chondrites. Therefore, says Sarafian, ‘14 million years after the start of the solar system, we can see that the carbonaceous chondrite water source was present in the inner solar system’.

This suggests Earth retained its water through repeated impacts, such as the famous ‘giant impact’ thought to have formed the moon. ‘That would make us rethink how water is preserved during impact events,’ Sarafian says. Secondly, it suggests that Earth could have been ripe for life much earlier than previously thought. There is no evidence that Earth held life until about 750 million years after its formation, says Sarafian, but ‘it would be difficult to find any evidence of life any older because there really aren’t many rocks that old’.

Sean Raymond of the Astrophysical Laboratory of Bordeaux says that, while the results are unsurprising, the techniques used are novel and impressive. ‘It fits the dynamical models that we have so far very nicely, because we’ve been saying for a long time that it had to be that way,’ he says. ‘But to infer that from meteorites is pretty cool.’