Quantum tunnelling is a phenomenon in which particles can pass through potential energy barriers they do not have the energy to overcome. In reactions at temperatures close to absolute zero, this is the dominant reaction pathway. Electric fields, meanwhile, have long been theorised to hold the potential to control chemical reactions but experimental evidence to that effect has only recently been discovered.

Now, a team led by Sebastian Kozuch from Ben-Gurion University of the Negev, Israel, has combined the two concepts and looked at three organic compounds – pentalene π bond-shifting, a semibullvalene Cope rearrangement and how diazabicyclohexadiene degrades to cyclobutadiene and N2 in a pseudo-retro-Diels–Alder reaction – to uncover the effect of an external electric field on simple transformations within molecules.

‘This research introduces the external electric field as a valuable tool able to tune chemical processes that occur by quantum mechanical tunnelling at ultra-low temperatures and offers an elegant and promising starting point towards tighter control of reactions subject to the exotic and always perplexing laws of quantum mechanics,’ comments Antonio Fernández-Ramos who simulates chemical reactions to study their dynamics at the University of Santiago de Compostela in Spain.

The researchers predict dramatic effects upon the kinetics of the three systems at temperatures where the reactions can only proceed via heavy-atom tunnelling: quantum tunnelling of an atom that is larger than hydrogen. They control the reaction rate by changing the direction and strength of the field and are even able to halt the degradation of diazabicyclohexadiene by applying the electric field in a certain direction. 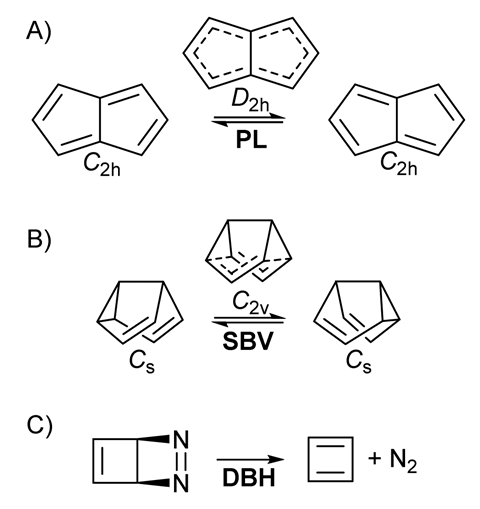 ‘It is refreshing to see this first study of an up-to-now unexplored territory combining external electric fields and quantum tunnelling at cryogenic temperatures, which opens a door for many interesting and fundamental discoveries about chemical reactivity to come,’ comments Edyta Greer whose research focuses on heavy-atom tunnelling in organic chemistry at Baruch College of the City University of New York, US.

‘We saw many very interesting effects but the unexpected one was with pentalene,’ explains Kozuch. ‘We expected the reaction to go a bit faster or slower depending on the direction of the electric field, however, when the field was perpendicular to the plane of the molecule, we saw that the barrier goes down but the rate of reaction was much slower.’ This observation goes against the established kinetic models for normal reactions, however, in the tunnelling regime, the barrier width becomes extremely important. ‘The perpendicular field made the molecule distort in a convex manner, so the trajectory that the atoms have to move to cover this reaction was larger and that makes the tunnelling much slower,’ adds Kozuch.

‘Quantum tunnelling dominates many reactions at low temperature; now we see how external electric fields can influence that effect,’ says Johannes Kästner, who simulates reactive tunnelling at the University of Stuttgart in Germany. ‘The change in rate constants as well as in reaction energies highlight how chemists can control this effect to shift equilibria as well as induce stability or instantaneous destruction of molecules.’

For now, the use of electric fields to help control chemical reactions remains predominantly theoretical, but with experimental evidence emerging that shows the possibility of achieving this in the lab, Kozuch and his team are hopeful that their predictions may too be realised in the future. In the meantime, they plan to probe the effect further by looking at heavy-atom and hydrogen tunnelling in other systems to understand better the limits and prospects of this approach.