Scientists in Germany have catalysed a heavy-atom quantum tunnelling reaction by doping the reaction matrix with Lewis acids. Boron trifluoride increased the rate to such an extent that only the products could be detected in the reaction mix.

Quantum tunnelling is a ‘very deep property of matter related to the Heisenberg uncertainty principle,’ explains Wolfram Sander from Ruhr University Bochum in Germany, who led the study. Tunnelling enables particles to pass through a potential energy barrier, instead of overcoming the activation energy. The probability of quantum tunnelling depends on the specific reaction, but ‘it’s always there,’ says Sander, ‘you cannot switch it off.’ In tunnelling, any element other than hydrogen is a heavy element, of which relatively few are known to undergo tunnelling reactions. 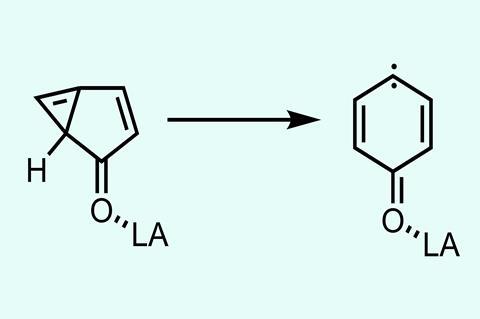 1H-Bicyclo[3.1.0]-hexa-3,5-dien-2-one is a highly strained cyclopropene that rearranges to 4-oxocyclohexa-2,5-dienylidene via heavy-atom tunneling. H2 O, CF3 I and BF3 form Lewis acid–base complexes with both reactant and product. The tunneling rate increased by a factor of 11 for the H2 O complex, by 23 for the CF3 I complex, and was too fast to be measured for the BF3 complex

Unexpectedly fast reaction rates at cryogenic temperatures indicate a quantum tunnelling reaction, meaning particles have a sufficiently high tunnelling probability. Additionally, quantum tunnelling is independent of temperature, so the rate is roughly the same at 3K, 15K, or 30K and so on, provided there are no thermal contributions.

Conventional catalysis lowers the activation barrier by stabilising the transition state. However, in quantum reactions there is no transition state to stabilise, so how could you catalyse them? ‘We found, in this specific example, that we get a tremendous increase of the tunnelling rates if our molecules interact with a Lewis acid,’ says Sander. The acids used were H2 O, CF3 I, and BF3, chosen to study the effect of hydrogen bonding, halogen bonding and Lewis acid–base interactions on the tunnelling rate. These three acids all increased the tunnelling rates significantly for 1H-bicyclo[3.1.0]-hexa-3,5-diene-2-one, a strained cyclopropane, rearranging into 4-oxocyclohexa-2,5-dienylidine.

Unlike conventional catalysis, quantum catalysis changes the barrier height and width. ‘The definition of barrier width is not so straightforward,’ explains Sander, although a narrow activation barrier will increase the probability of tunnelling, which increases the rate of reaction.

Sebastian Kozuch, a computational chemist working on heavy-atom tunnelling at the Ben-Gurion University of the Negev in Israel, calls the work beautiful, ‘but not completely surprising.’ This is because they are ‘changing the profile of the reaction by adding a group [the Lewis acid] that obviously changes all of the electron density of the molecule, which has a strong effect on kinetics, especially on tunnelling kinetics.’ In this case the Lewis acid does not de-coordinate due to the low temperatures needed for matrix isolation, so there is no catalytic turnover.

However, ‘just to say we can do chemistry like this, making molecules react at the lowest temperatures possible, that’s the cool concept,’ adds Kozuch.

It remains challenging to predict which reactions undergo tunnelling, especially heavy-atom tunnelling. ‘We want to understand really fundamentally how we can control a tunnelling reaction by environmental influence,’ says Sander. ‘We just want to learn.’