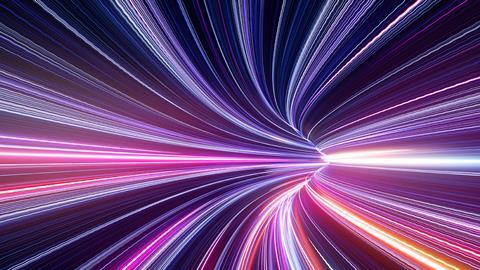 Explainer: What is quantum tunnelling?

At the smallest scale, the world is weird. When things get down to the size of an atom, the mechanics that rule our macroscopic world no longer apply.

According to quantum rules, electrons can behave both as a particle and a wave, and objects can be in different states at once – a phenomenon quantum computers use to their advantage. One of the strangest things scientists discovered when picking apart quantum mathematics is tunnelling.

What is quantum tunnelling?

Imagine releasing a quantum mechanical particle, like an electron or proton, into a space on one side of an potential energy hill. Since you’re sure that the particle can’t escape – it’s not energetic enough to climb over the hill – you leave it to its own devices.

But when you go back to check on it, the particle is gone. You find it happily sitting on the other side of the hill, having sneaked straight through it. Tunnelling particles can simply pass through energy barriers they don’t have the energy to surmount.

Sounds contrary to everything you think of as the laws of physics? That’s what the scientists who first discovered it in 1927 thought. Today we know that tunnelling is fairly common in the quantum world. Semiconductors, transistors and diodes wouldn’t work without it.

Tunnelling is still throwing up some surprises almost a century later. Just four years ago researchers found that water confined in crystal channels tunnels within symmetric clusters – a phenomenon so strange that its discoverers called it a ‘new state of water’.

How do we know it’s really happening?

Tunnelling is the reason the sun shines.

Most stars fuse protons into helium nuclei, expelling enormous amounts of energy in the process. The problem is that, while our sun is hot, it’s not hot enough to give the sun’s protons enough energy to overcome their mutual electrostatic repulsion. But the tiny tunnelling probability – 1 in 1028 – means that some particles still make it through their repulsive barrier.

Since the sun has vast amounts of hydrogen, this tiny probability translates in 1038 fusion events per second producing enough light and heat to make life on Earth possible.

Tunnelling is actually a terrible word to use because the term conjures up images of a particle boring its way through a wall. But there is no hole, tunnel or any other type of opening involved.

Instead, we need to use the same currency the field of quantum mechanics deals in: probability. A particle can be described as an oscillating wave, its amplitude representing the probability of finding it in a certain place. When encountering a barrier, this wave doesn’t end abruptly. Instead, it continues inside and on the far side of the barrier, albeit with a smaller amplitude.

Tunnelling is the probability of finding a particle on the far side of a barrier. The lighter a particle, and the smaller and narrower the barrier, the more likely this becomes.

This all sounds like physics. Why should chemists care?

Synthetic chemists tend to ignore tunnelling. However, it can drive reactions that wouldn’t otherwise happen.

Interstellar clouds are so cold (less than –250°C) that no reactions should take place, yet they contain water and formaldehyde – compounds that have likely formed through tunnelling reactivity.

The more scientists look for tunnelling, the more cases they find. Entire trifluoromethyl groups – which are huge in a quantum terms – have been found to sneak through energy barriers. Hydrogen atoms can tunnel over large distances. There are even cases of two hydrogen atom tunnelling in tandem.

Some researchers hope to control tunnelling in the same way kinetic and thermodynamic parameters are controlled during reactions. This could lead to some unexpected reactivity and selectivity .

There are also applications that wouldn’t exist without tunnelling, like scanning tunnelling microscopy, which allows chemists to see individual atoms.

Tunnelling sounds great. Can I tunnel, too?

Well, technically, you can. But tunnelling probabilities are extremely sensitive to an object’s mass. An electron weighs 9x10–31kg, a person around 70kg.

Jack Fraser, a physics graduate from the University of Oxford wrote: ‘You could get a trillion people walking into walls, a trillion times every second since the beginning of the universe [13.8 billion years ago] – and the likelihood of one of them walking through the wall is still so small, it’s [practically] zero.’

But while a whole person will never be able to tunnel, lots of tunnelling might be happening inside our bodies. Some researchers have suggested that enzymes – particularly those that activate carbon–hydrogen bonds – promote hydrogen atom tunnelling.

One of these enzymes is alcohol dehydrogenase. It converts ethanol into acetaldehyde, the compound that causes headaches, dizziness and nausea after a night out drinking. So next time you’re nursing a hangover, take solace in the fact that it’s all down to quantum chemistry.

Thanks to Peter Schreiner from the University of Giessen, Germany, for helpful discussions.