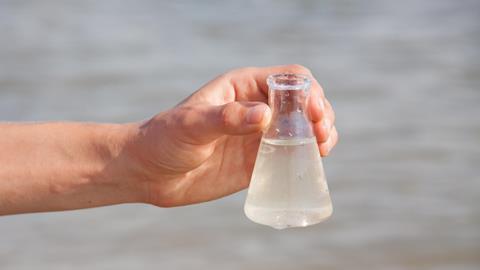 Electrochemical technique can trap up to 24% of nickel in metal-rich seawater, in just seven days

The same process that causes crusty limescale to build up on the inside of your kettle could help to clean up nickel pollution in seawater, according to new research from the South Pacific island of New Caledonia.

Nickel mining is a major industry in New Caledonia; the small island is one of the world’s largest producers of the metal. But the combination of large open-pit mines and heavy rains means a considerable amount of nickel, along with lead and other metals, ends up the waters surrounding the island. That nickel pollution can be dangerous to human health, as it becomes more concentrated in the bodies of fish and shellfish as it moves up the food chain.

Marc Jeannin, an environmental engineer at the University of La Rochelle in France, and his colleagues at the University of New Caledonia in Noumea wondered if they could use the process of cathodic protection, a method used to control corrosion on metallic structures in the ocean, to pull some of that nickel out of the water.

When a weak electric current is applied to a metal in seawater, it causes calcium carbonate and magnesium dihydroxide to precipitate out of the water and form a calcareous deposit on the metal surface. The process had never been studied in the presence of metallic contaminants like nickel, and the researchers wanted to know if some of the nickel ions might also get trapped in the deposit.

The team placed a galvanised steel wire in a tub of artificial seawater spiked with NiCl2 salt, and ran a weak current through it for seven days. At the end of that short time, they found that as much as 24% of the nickel initially present had been trapped in the limescale deposit.

This could be a cheap and simple way of cleaning up nickel contamination, according to Jeannin. ‘We can’t remove all the pollution, but this could be a way to limit it,’ he says.

The results were somewhat serendipitous, as pollution remediation was not one of the goals of the original research plan. Jeannin’s main research is developing ways to fight coastal erosion – he is studying how the calcareous deposits on a wire mesh buried on the seafloor could act as a sort of natural cement to help stabilise sediments under dykes, or on sandy beaches.

Jeannin started the New Caledonia project to determine whether the mesh could trap enough metal contaminants to help study the history of nickel pollution at the site. ‘But when we found out we could trap a lot of nickel, we started to think about the possible industrial applications,’ he recalls.

Kristin Orians, an environmental chemist at the University of British Columbia in Vancouver, says that the method would remove not only nickel, but a significant amount of other metals as well. ‘Co-precipitation is not very selective,’ she tells Chemistry World. ‘I do not know if it would effectively remove enough of the toxic metal without also removing metals which may be beneficial, such as iron.’

However, Jeannin is not concerned that the system, if deployed on a large scale, would strip vital minerals from the oceans. In the experiment, just 3% of the calcium and 0.4% of the magnesium were removed from the water, and he says that the amount of iron in the ocean is big enough that it should not be significantly affected.

Specifically, Jeannin suggests that a system like this could be deployed in places where nickel run-off is high, such as Noumea harbour, to help reduce the amount that gets into the sea. It would require little monitoring, and could be connected to renewable energy sources such as solar panels. The nickel and other contaminants trapped in the limescale could even be recovered and recycled.

Jeannin says he and his colleagues are working with companies in France and New Caledonia to develop a pilot project to help determine whether system could be deployed on an industrial scale.