Simplified system could find use in smart windows and rewritable displays

Scientists in China have made a rewritable electrochromic display using a hydrogel for the first time. 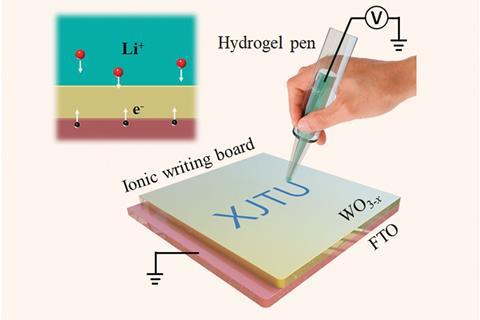 Their system contains a multifunctional hydrogel deposited directly on a tungsten oxide film on top of an F-doped SnO2 (FTO) layer. To make this possible, the researchers embedded the hydrogel with aqueous lithium chloride, allowing it to simultaneously act as a transparent electrode, electrolyte and ion storage layer. By reducing the number of interfaces present in the device, the team were able to improve the performance of the device for display applications, compared to other electrochromic systems, while also reducing production costs.

On applying a small bias between the hydrogel layer and FTO electrode, the device exhibits a uniform colour change that is reversed by applying a negative bias. This reversible colour change means the device could find use in smart windows, blocking solar heat while in its coloured state. The efficiency of the colour changing properties of their electrochromic system also inspired the team to test it as an ionic writing board.

‘Traditional electrochromic devices can only display fixed information, which is determined by preset patterns or pixels, and cannot be changed afterward. This has been one of the major challenges for current electrochromic displays,’ explains Wang. ‘In our hydrogel-based ionic writing board, arbitrary text and patterns can be drawn readily with a hydrogel pen just like writing calligraphy, and the information on this board is totally erasable and rewritable.’

Wang and his team designed a ‘pen’ that can deposit a hydrogel layer on their device substrate. By applying an appropriate electrical bias at the nib, a coloured pattern could be drawn and retained on the device surface, even after the researchers removed the bias. Interestingly, applying a reverse biase erases the pattern, returning the device to its clean state so it can be redrawn on. 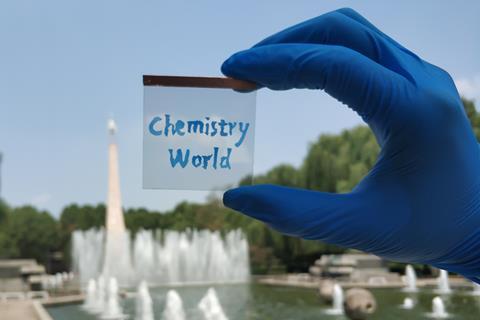 Writing and drawing with the hydrogel pen is easy

While the team have proven the ability to create a rewritable display device, they are not shy about recognising its weaknesses: ‘There is still a lot of work to do to get the device commercially [viable]. For example, we need to study and enhance the long-term stability of the hydrogel-based electrochromic device.’

Jianguo Mei, an expert in electronic polymers for use in flexible and printed devices, from Purdue University in the US, describes the idea as interesting but, like Wang, adds a note of caution: ‘Commercialising this technology for window products will be challenging – it requires an extremely demanding durability, ie 10–30 years.’