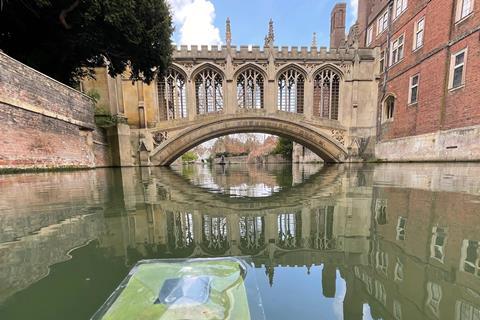 A lightweight ‘leaf-like’ device has combined light harvesting and catalytic capabilities, making it the first floating device of its kind.1 Tested on the river Cam in Cambridge, this artificial leaf can synthesise sustainable fuels, such as hydrogen and syngas, from just sunlight and water. Scaled-up versions could work on open waters, offering the possibility of supplying energy in isolated locations.

The layers of the leaf determine different properties. Both cathode and anode actively capture the energy needed from sunlight, thanks to substances like lead-halide perovskites and bismuth vanadate, respectively. Then, platinum and cobalt compounds catalyse chemical reactions, namely water splitting and the reduction of carbon dioxide. Finally, cheap carbon paste encapsulants protect and preserve the device. This clever combination enables assembly and processability at room temperature, as well as flexible devices as the layers are printed on polymers.

The manufacturing method – spin-coating – demonstrated potential for scalability. Researchers produced leaves as large as 100cm2, which operated consistently for 24 hours without a decrease in performance or stability. The devices were field tested around Cambridge, showing an efficiency that is comparable with plants. It’s a huge improvement over the previous prototypes, supported on bulkier and heavier glass.

Floating artificial leaves could provide enough energy to replace fossil fuels in remote regions – including new ways to power cargo vessels. Moreover, they could liberate land for other purposes too, such as agriculture. In a press release, lead author Erwin Reisner, from the University of Cambridge, explains that the team wanted to explore how to trim down materials and weight that affected performance. With leaves light enough to float, ‘clean energy and land use aren’t competing with one another’, which opens new opportunities in artificial photosynthesis, he said.