Saturn’s rings are an enduring mystery for astronomers, with many believing the swirling mass of ice and dust formed from geyser eruptions on the planet’s moons. But a chemical analysis has now revealed some dust particles orbiting Saturn have come from outside the solar system. 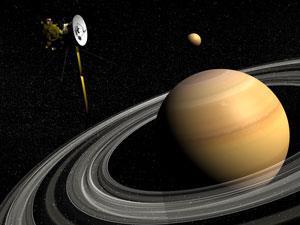 Nasa’s Cassini spacecraft has been collecting and analysing millions of icy dust particles around Saturn over the past decade. Back in 2005 Cassini’s cosmic dust analyser (CDA) captured particles being thrown out of Enceladus, Saturn’s sixth largest moon, and found that the dust is topping up the planet’s rings.

But the CDA has now found 36 interstellar dust grains among the millions it has sampled. An international team of scientists noted the captured grains travelled at speeds of up to 45000mph and along a different path to samples native to Saturn’s system. This suggests they came from the local interstellar cloud, a diffuse cloud of gas and dust, which our solar system is passing through.

Mass spectrometry reveals that these grains are rich in minerals such as magnesium silicates and oxides, as well as iron. Particles from within our solar system are typically icy and less chemically diverse.