Radio astronomy analysis picks benzonitrile signal out of the noise 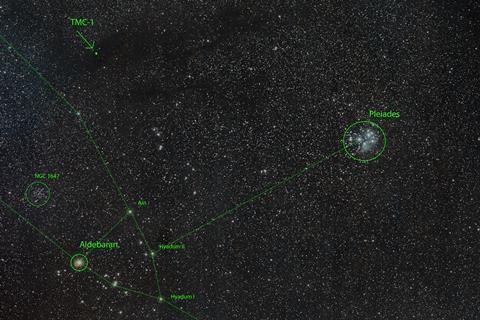 The aromatic molecule benzonitrile has been detected in the Taurus Molecular Cloud – a region of interstellar space known for containing complex molecules – using radio telescopes.

Aromatic molecules are thought to be widely distributed throughout the universe, responsible for as-yet unidentified infrared bands – emissions generated by numerous cosmic sources. This, however, is the first time a specific aromatic molecule has been detected using radio spectroscopy.

Scientists at the National Radio Astronomy Observatory in Charlottesville, Virginia, used a method called spectral stacking to hunt through existing radio emissions data – gathered by the Nobeyama radio telescope in Japan – for a number of simple aromatic molecules, including benzonitrile. They were able to confirm the molecule’s identity using their own experimental data measuring the different rotational transitions of benzonitrile, combined with more observations from the Green Bank Telescope in West Virginia, which detected nine different rotational transitions of benzonitrile in the same region.

Their findings offer insights into the formation of more complex organic molecules in this part of space, where material will eventually be incorporated into new stars and planets.