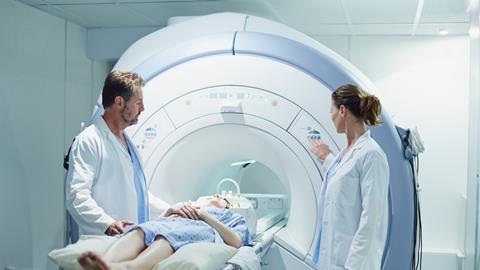 Epigenetic MRI offers a way to understand how the brain learns

Carbon-13 could act as an MRI probe to reveal new insights into gene regulation in the brain. The technique has so far only been demonstrated in pig brains, but the researchers hope that it could soon be tested in living humans, where it could help understand brain development and function, and conditions such as Alzheimer’s disease.

The human brain controls the body in two ways. On short timescales, neurons activate nerves and detailed images of this can be produced by functional magnetic resonance imaging, which picks up magnetic changes caused by oxygenated blood flowing around active neurons. On longer timescales, the attachment of methyl groups to DNA in the brain turns genes on and off, changing their expression. This process, called epigenetics, is crucial to learning, development and neural plasticity, but it has hitherto been impossible to image this process in a living brain. ‘The previous method requires taking samples, extracting DNA and looking at its chemistry,’ explains radiologist King C Li of the University of Illinois at Urbana-Champaign. ‘That is not good if you want to study it in a living organism over and over again.’ 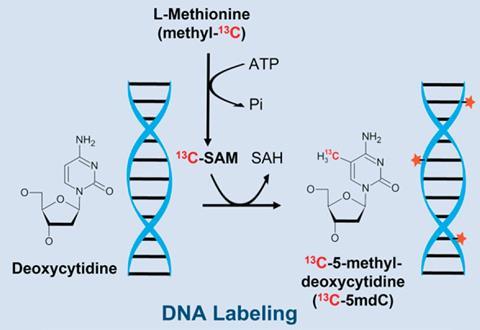 Carbon-13 labelled methionine can cross the blood-brain barrier and is converted to S-adenosyl methionine, which can methylate DNA. The new eMRI technique can detect this methylation in the brain in living animals – unlike current technologies

To test their new technique, Li and colleagues fed newborn piglets a special diet in which almost all the protein was replaced with free amino acids. The amino acid linked with DNA methylation, methionine, was labelled with carbon-13 in this diet. After either 10 days or 32 days, they euthanised the pigs and cut their brains in half. In one half, they performed the standard tissue sampling procedure, measuring the levels of DNA methylation. Their measurements of the other half, however, were more subtle. Making use of the fact that carbon-13 – unlike carbon-12 – has a magnetic moment, the researchers used MRI to determine where in the brain the methionine had gone and so identify regions of epigenetic tagging. They call the new technique eMRI.

The results were consistent with neurologists’ hypotheses about brain development. ‘Neonates have to learn very fast,’ says Li. ‘We have been able to show that there are parts of the brain that pick up a lot of this methionine and these … should be correlated to a high degree with the learning process.’

The researchers have yet to test their technique in intact animal brains, but Li believes the first trials in humans are ‘less than a year’ away. ‘Because a human brain is 10 times the size of a small pig brain, the scanning time is only 1% [as long],’ he explains, ‘so when we get to humans it’s actually a much easier experiment to do.’ Humans, he says, could simply take the labelled methionine as a dietary supplement in the weeks preceding a scan.

Jacob Hooker of Massachusetts General Hospital says carbon-13 NMR spectroscopy has been used to trace brain metabolism for the past 30 years, and the carbon compounds used in this paper were known previously. ‘What appears to be new here is the combination of a few ideas into a framework for [magnetic resonance]-based epigenetic imaging,’ he says. It is unclear whether the differences in DNA methylation the researchers have found would lead to meaningfully different levels of protein transcription in different areas of the brain, he says, and the next step is to test this.