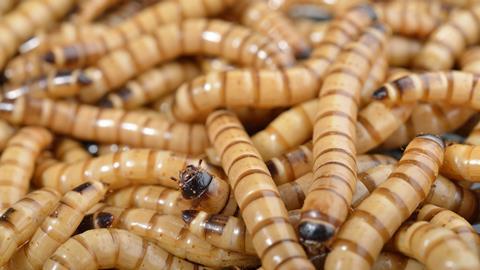 EU clears way for the sale of edible insect products

The EU has approved dried yellow mealworm to be sold as a ‘novel food’ making it the first EU-wide approval of insects for human consumption. The authorisation by the European commission’s standing committee on plants, animals, food and feed earlier this week allows larvae of the beetle Tenebrio molitor to be used as a whole, dried insect in snacks or as a food ingredient. French insect farming company Agronutris, which submitted the novel food application in 2018, is now the first company officially authorised to sell insects for food in the EU.

The authorisation – one of the final steps in the process for authorising a novel food – follows an opinion by the European Food Safety Authority (Efsa) published in January that concluded dried yellow mealworm products are safe for human consumption at the uses and levels proposed by Agronutris. The company now has a five-year exclusivity for marketing dried yellow mealworm in Europe.

The use of insects as an alternate source of protein is not new and they are regularly eaten in Europe and many other parts of the world, the commission pointed out. A transitional period allows food business operators to continue placing whole insects on the market subject to certain conditions.

The commission expects to adopt a regulation authorising dried yellow mealworm as a food product in the coming weeks. Due to potential allergy issues, particularly for those with pre-existing allergies to crustaceans and dust mites, specific labelling is required for such food products.

There are currently 11 applications for insects that are pending and subject to a safety evaluation by Efsa. Insects for food represent a niche market in the EU, but the commission said the ‘high feed conversion efficiency of insects’ means reduced greenhouse gas emissions, less use of water and arable lands, and the fact that insect-based bioconversion reduces food waste, when compared with other protein sources such as those from livestock.