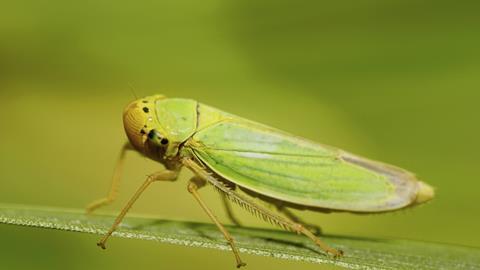 An international team of researchers and lawyers is sounding the alarm about a US government programme that is developing genetically modified viruses that would be dispersed into the environment using insects such as sap-sucking aphids or leafhoppers. The virus-infected insects are being developed to enable gene-editing of mature crops in the field to improve and protect them. The work by the Pentagon’s Defense Advanced Research Project Agency (Darpa) could be seen as an attempt to develop a new class of bioweapon for hostile or offensive purposes, and prompt other nations to pursue retaliatory research in the agricultural arena, they warn.

The authors from the Max Planck Institute for Evolutionary Biology and the University of Freiburg both in Germany, as well as the University of Montpellier in France, suggest that the Darpa programme could breach the biological weapons convention.

Known as the Insect Allies programme, the Darpa initiative began in summer 2017. It is the first to propose and fund the development of horizontal environmental genetic alteration agent (Hegaa) viruses. These are viruses that have been genetically modified to allow them to edit the chromosomes of targeted species when released into the environment.

The researchers note that the most obvious candidate for Hegaas is a Crispr system engineered to be part of a virus, because this would allow scientists to target specific plant genes by modifying chromosomes to, for example, increase resilience to environmental challenges or herbicides. However, they argue that the programme could easily be simplified to generate a new class of biological weapon.

Insect Allies is reportedly backed by $27 million (£21 million) of funding. There are four academic research teams currently working on the programme, including investigators at the Boyce Thompson Institute in New York, Pennsylvania State University, Ohio State University and the University of Texas at Austin.

‘I don’t think Darpa is intentionally trying to make a bioweapon, but this technology could be very easily modified to do that,’ cautions Derek Caetano-Anollés, a postdoc at the Max Planck Institute for Evolutionary Biology’s evolutionary genetics department, who is a co-author on the paper. ‘It may give the impression to anybody looking at the science the US is funding that this is maybe being investigated for weapon purposes, and then they might start trying to weaponise this same technology.’

The real danger of weaponising these insect dispersed viruses is the covert nature of this method, Caetano-Anollés tells Chemistry World. It doesn’t involve anything as noticeable as planes flying overhead to spray farms, and instead insects are quietly released that would pass these viruses onto crops that could kill them or sterilise their seeds.

‘Farmers wouldn’t know it was a targeted attack,’ Caetano-Anollés says. ‘It would just look like an illness or a virus that has infected their plants.’ He explains that the technique can be used to achieve various nefarious purposes, including to starve a population or to gain an economic advantage. ‘You could in theory use it against your competitor, if you are a farmer, so that only your crops are resistant to these viruses – you could target a competitor’s crops and destroy them,’ he says.

He emphasised that at no point in the programme is Darpa funding open release of Insect Allies systems, noting that regulatory approval would be required for any test.

Darpa says that the goal of Insect Allies is to create a generalised platform that can be readily adapted to confront future threats, whether they are related to weather extremes, deliberate attacks on the crop system, new outbreaks of pests or plant diseases or some other environmental phenomenon. The agency also notes that currently agriculture may not be able to respond quickly enough to address novel or unanticipated threats to crops. Darpa says it created Insect Allies to develop new, more powerful tools that can hedge against uncertainty and address numerous risks to the US food supply.