Theoretical chemists in India have used cluster chemistry to help justify placing lanthanum and actinium in the f block, rather than the d block.

Which elements should be in group 3 of the periodic table has been a source of debate over the last century; a debate that has become quite heated in the last decade. Arguments can be made for the first group of the d block to be made up of scandium, yttrium, lanthanum and actinium – namely that these elements all have one d electron in their valence shell. Similarly they can be made for the group to be scandium, yttrium, lutetium and lawrencium – the properties of the f14 elements lutetium and lawrencium best follow scandium and yttrium and therefore they belong in the same group – with a 14-element f block. The former, most common form, is used by Wikipedia and the Royal Society of Chemistry. Meanwhile, the IUPAC Red Book defines the lanthanoids as the 15 elements from lanthanum to lutetium, the actinoids as actinium to lawrencium, and groups scandium and yttrium with the lanthanoids to form the rare earth elements. As a result, the official IUPAC periodic table has two gaps under yttrium, leaving lanthanum, actinium, lutetium and lawrencium in a 15-element wide f block. 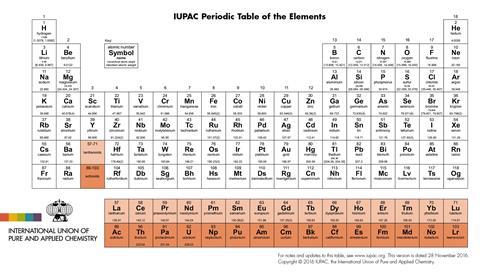 Source: © 2016 IUPAC, the International Union of Pure and Applied Chemistry

IUPAC’s version of the periodic table

Now, Tapan Ghanty and colleagues, from the Homi Bhabha National Institute in Mumbai, India, have used clusters of lead and tin to help them computationally model the chemical behaviour of the first and last members of the lanthanoid and actinoid series. The empty cages in the centre of the Zintl ion clusters, Pb122- and Sn122-, are large enough to hold a lanthanum, actinium, lutetium or lawrencium ion. Scientists have studied the Zintl ion clusters on their own many times before so understand their properties well. This previous knowledge allowed Ghanty’s team to perform density functional theory calculations on Zintl clusters containing lanthanum, actinium, lutetium or lawrencium ions to predict and compare the chemical and electronic behaviour of the four controversial elements.

Researchers have made stannaspherenes and plumbaspherenes to encapsulate lutetium, lawrencium, lanthanum and actinium

Physical chemist Laurence Lavelle, from the University of California Los Angeles in the US, disagrees that a 15-element f block is the answer. ‘Given the similarities of lanthanum, actinium, lutetium and lawrencium discussed in the paper, all showing 18-electron transition-metal d block chemistry, the difficulty now arises as to how best to illustrate this in the periodic table. Placing all four elements in the f block is visually appealing but is contrary to [the rest of] the periodic table and is also contrary to the findings of their paper as all four elements are shown to exhibit compound properties associated with d block elements.’ 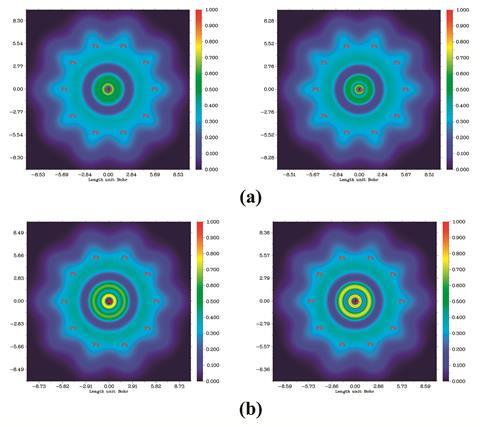 2D color-filled maps of the electron localisation function (ELF) of (a) Lr@Pb12 and Lu@Pb12 and (b) La@Pb12 and Ac@Pb12. The ELF is an important parameter for understanding the nature of bonding between the constituent atoms

Lavelle says ‘the best representation still appears to be the original and widely used visual depiction of the periodic table with scandium, yttrium, lanthanum and actinium all in group 3 as the first d block elements, which is consistent with their three outer valence electrons and d1 state.’