Some theoretical chemists believe many of liquid water’s unusual properties, such as its decrease in density on freezing and its decrease in viscosity on compression, can be explained if, under ambient conditions, it comprises a mixture of two phases that would separate at low temperature and high pressure. Previous experimental attempts to test this, however, have been hamstrung by experimental considerations. Now a new approach, involving laser heating pressurised water from an exotic frozen state, provides more direct verification than ever before.

In 2017, Anders Nilsson of the University of Stockholm in Sweden and colleagues conducted femtosecond x-ray scattering of micrometre-scale water droplets cooled to around -40˚C. Their results captured changes in the structure of water suggesting that, as it cooled, it approached a critical point at which it would separate into two distinct phases. Unfortunately, to actually pass into this two-phase region, theoretical simulations suggest kilobar-scale pressure is required: ‘We calculated that we needed to have a vessel with steel several inches thick, keep it at very low temperatures with enormous insulation and bring this into an x-ray laser like a bomb,’ says Nilsson: ‘This was not an avenue we could go down … The other alternative was to go up [in temperature] from below.’ 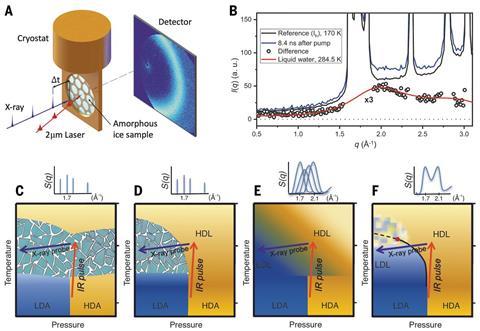 The team mounted high-density amorphous ice samples in a cryostat inside a vacuum chamber to allow for pump-probe measurements in a transmission geometry, using infrared and x-ray lasers

Below 150K, water can exist in a glassy metastable state called high-density amorphous ice, as the molecules have insufficient energy to crystallise. In the new research, Nilsson and colleagues mounted samples of high-density amorphous ice produced at high pressure inside a cryostat, before using infrared laser pulses to further increase their pressure. As the samples decompressed, this pressure dissipated as heat, allowing the molecules to form crystalline ice after between 3 and 50 microseconds. A variable time after the pump infrared pulse, the researchers hit each sample with an x-ray probe pulse, allowing them to track the states of the molecules.

The diffraction patterns they observed, they concluded, suggested that the high-density amorphous ice melted into a high density liquid, underwent a phase transition into a low density liquid and only then formed traditional ice. The researchers now hope to observe the transition through the critical point itself using this technique. ‘It’s of course very challenging and may take us a few years,’ says Nilsson, ‘but we have an idea for how to do it.’

‘I think it’s a very significant paper,’ says theoretical chemist Pablo Debenetti of Princeton University in the US. ‘To say something about the liquid–liquid transition experimentally, you have to be able to make measurements at low temperatures, very short times and high pressures, and this is the first time anyone has done all three. It’s a remarkable experimental accomplishment.’