How many water molecules make a droplet?

Researchers in Italy have investigated how many water molecules are needed to solvate one. ‘We find that a water molecule is behaving like being in a glass of water when it is surrounded by just 20 water molecules,’ explains Michele Ceotto from the University of Milan, who led the work. 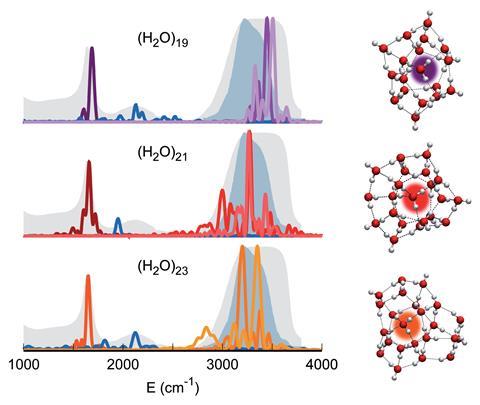 By simulating the vibrational spectra of water clusters of increasing size using quantum-derived semiclassical spectroscopy, Ceotto and his team looked to see when the spectra matched that of bulk water. ‘With just a few water molecules, which make up to two solvation shells, the physics of vibration in liquid water is recovered,’ explains Ceotto. In a simple description of water, individual molecules can be thought of as being a double donor and double acceptor of hydrogen bonds. And although Ceotto’s team’s findings show that tetrahedral coordination is necessary, they suggest it is insufficient on its own to be reflective of bulk water.

Martina Havenith-Newen of Ruhr-University Bochum in Germany, who has also studied water clusters using spectroscopy, doesn’t find the results surprising. ‘I mean, water is a weird substance!’ she says. ‘It’s known that we really have difficulty describing it. If you have a model with two or three water molecules, it is clear you cannot fully describe the bulk.’

Ceotto’s team used a quantum-derived method that allowed them to investigate the combination band of water – a broad peak in the vibrational spectrum. These signals arise when a transition given by two vibrational modes combines. In the case of water, this band occurs due to the coupling of bending O–H bonds with librating motions of the molecule in which it rotates back and forth. Classical simulations cannot reproduce these, but it was important to demonstrate a match between this part of the spectrum for the central molecule in the cluster and that for bulk water to be sure that the full extent of water’s vibrational features were captured.

Ceotto hopes that this work can be about more than just exploring the properties of water: ‘It’s not only the electronic motion which needs quantum treatment; it is also necessary to include quantum mechanical effects to properly describe nuclear motion. My main goal is to provide the community with a robust molecular dynamics protocol able to include quantum effects and precisely describe molecular mechanics.’ Future work from the team will delve into the quantum nuclear description of macromolecules.