The wave function of a dissociative excited state of the helium dimer has been imaged using a technique that involves blowing apart the molecules in an electromagnetic field. The researchers hope similar techniques could be used to investigate the wave functions of other exotic states, which are difficult to study using conventional techniques. 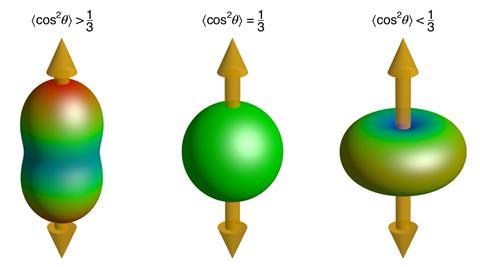 Helium is the most noble of the noble gases: under standard conditions, any inclination to form molecules is easily overwhelmed by the thermal motion of the atoms. At cryogenic temperatures, however, when these motions are subdued, the minute van der Waals forces can dominate, leading to the formation of a highly-unusual dimer. In 2016, Maksim Kunitski and colleagues led by Reinhard Dörner at Goethe University in Frankfurt used Coulomb explosion imaging, in which a powerful laser pulse ionises both atoms, causing them to repel each other and move apart, to confirm theoretical predictions that it has just one bound state and image this state. ‘It’s 80% probable that you will meet the nuclei outside the potential well,’ explains Kunitski. This leads to its description as a quantum halo state. This state has zero angular momentum. Whereas most molecules are approximated as rigid rotors, in which all the bound states are excited coherently by an angular impulse, the helium dimer cannot survive rotational motion without dissociating.

In the new research, Dörner and colleagues fired a supersonic beam of helium dimers into a strong laser field. ‘It depends on the direction of the laser field with respect to the nuclear axis whether you strengthen the van der Waals interaction or weaken it,’ explains Dörner, ‘The dimer wants to rotate into the direction in which it’s most tightly bound, but if you rotate it, you put in angular momentum, and that kills it.’ A tiny fraction of a second after injecting the dimers into the laser field, the researchers fired the powerful laser pulse to trigger the Coulomb explosion. By detecting the helium atoms, the researchers reconstructed the nature of the dissociative state. ‘The part which flies apart is a wave, and you can see it because it interferes with its counterpart, which is still bound,’ explains Dörner.

The researchers now intend to study more complicated states involving multiple atoms. Efimov states – a quantum three-body phenomenon from nuclear physics first observed in helium trimers by the Goethe researchers in 2017 – hold particular interest. ‘In every normal molecule, you make a bond weaker until eventually off it goes,’ explains Dörner. ‘With the Efimov effect, there is a tiny region in which an infinite number of infinitely large states pop up.’

‘It’s a beautifully simply experiment: you just have this little ball of Jell-O that’s more or less stationary and you create this wavepacket that spreads out and creates ripples in the Jell-O, and they can understand that by the Schrödinger equation,’ says Paul Julienne of University of Maryland, College Park. ‘It looks to me like the kind of thing that might make it into future textbooks. The interesting question is whether you can turn this into some kind of tool for doing something with and exploring other kinds of phenomena.’