Using a combination of sophisticated equipment and theoretical methods, chemists pictured the square of the wave function of H2 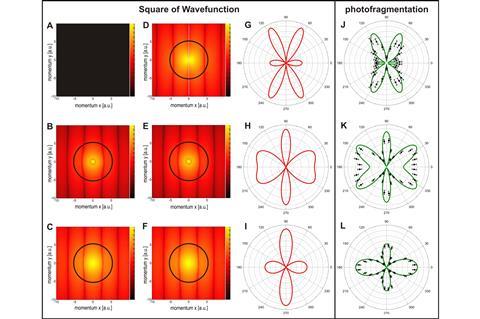 ‘There was simply no experimental approach to see the […] wave function directly,’ says Reinhard Dörner, a researcher at Goethe University in Frankfurt, Germany, and one of the lead authors of the paper. Dörner explains that serendipity played its part in this discovery. ‘[We] co-developed the technique that allows the detection a long time [ago], and used it for many other purposes.’

To picture the wave function of a hydrogen molecule the team first ionised it, then analysed what formed. The researchers then examined the angular distribution of the emitted electron – the probability distribution of which direction they fly off in. Then, they measured the kinetic energy of the remaining fragment (H2+). ‘After analysing the data of several experiments in different conditions, we managed to image the square of all the components of the wave function,’ explains Fernando Martín, a researcher at the Universidad Autónoma of Madrid, Spain, who led the computational studies. ‘Then we just had to combine them to get the full picture.’

Computational researchers also encountered a happy coincidence. Martín says they were lucky to discover ‘a mathematical serendipity – the probability to ionise an electron with high energy photons coincides with the square of the Fourier transform of [its] wave function’. Nevertheless, ‘it took us more than seven years to achieve this’, Martín concludes.

Núria López, an expert in theoretical chemistry working at the Institute of Chemical Research of Catalonia, Spain, says that ‘the present work sets out a robust pathway to improve our understanding of how [electron] correlation works’. She also believes it could pave the way for direct imaging of chemical reactions. ‘Probably photoreactions would come first, as these are closer to the setup employed,’ she says. López highlights the importance of harmonising experiments and theoretical work. ‘Simulations hold the key for understanding chemistry.’

This discovery could have further implications. Electron correlations are key to phenomena like superconductivity. If we could directly ‘see’ how electrons behave in these situations ‘it would probably allow us to solve the major riddle of high temperature superconductors’, concludes Dörner.