The path to quantum mechanics becomes smoother if you take a different route, says Philip Ball

There is something about the way quantum mechanics has traditionally been taught that is akin to pulling a rabbit out of a hat. That rabbit is Planck’s constant (h), which announces that henceforth energy must be chunked according to this tiny but finite quantity. Further magic follows: permuting  a particle’s position and momentum conjures up Planck’s constant again, and hey presto – here’s the uncertainty principle. 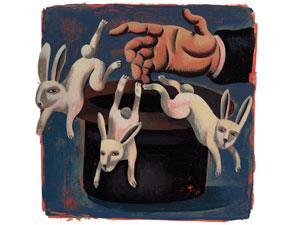 This approach is historical – Max Planck himself pulled his constant out of a hat to tame the equations of blackbody radiation in 1900. Einstein took it seriously five years later, applying it (in the face of more scepticism than is often appreciated) to electromagnetic radiation and suggesting that the photoelectric effect might offer a test of the idea. And precisely one hundred years ago, Niels Bohr saw that quantising electron energies

by means of h could explain discrete spectral emission and absorption lines.

But there’s no reason to suppose that the way quantum mechanics was discovered is the most logical or obvious means to comprehend its conceptual foundations – or to teach it. In some recent re-evaluations of quantum theory, the ‘quantum’ becomes almost incidental: it’s not really about discrete energy states at all. One prominent view, first expounded by John Wheeler, is that the theory is in fact about information – what is and is not knowable, and how the available information about different states is related.1

Quantisation also makes an almost surreptitious and counter intuitive appearance in another recent reconsideration of quantum principles: a new derivation of the Schrödinger equation by physicists Wolfgang Schleich of the University of Ulm, Germany, Marlan Scully of Texas A&M University, US, and their colleagues.2 As these authors say, many modern textbooks don’t bother to provide motivation for the formalism of quantum theory, but just insist that you’ll get it if you replace energy and momentum with appropriate h-carrying expressions. Plug these into the classical Hamiltonian – the equation for the energy of a particle that emerged from William Hamilton’s reformulation of classical mechanics in 1833 – and out comes the Schrödinger equation. More magic, in other words, justified by the sole consideration that it works.

Curiously, Erwin Schrödinger didn’t really motivate his equation either. It seems to be another example of how quantum theory was patched together by its pioneers in a succession of ‘fortunate guesses’ (as Planck himself described his introduction of h). Schleich explains that while Schrödinger was at the University of Zurich, Switzerland, he was sent the 1924 thesis of Louis de Broglie in which de Broglie proposed that matter – quantum particles such as electrons – could behave as a wave. Peter Debye encouraged Schrödinger to give a talk on de Broglie’s work, and pointed out that a matter wave should have an associated wave equation. Perhaps Schrödinger could find out what it is?

Find it he did – but without quite explaining how he got there. The basics are clear, however. Hamiltonian classical mechanics already contained the means to describe the motion of a (classical) particle as a wave: it’s the Hamilton–Jacobi equation, a nonlinear partial differential equation. Schrödinger used this as his starting point, but turned it into a linear equation for calculating the wavefunction.

Schleich and colleagues now show how to get from the nonlinear Hamilton-Jacobi equation to the linear Schrödinger equation. This involves postulating a particular relationship between the phase of the wave(function) and its amplitude: the amplitude depends on the phase and vice versa, whereas this relationship is only one-way for the classical situation. The details are complicated, but in short one needs to combine the Hamilton–Jacobi equation with a conservation equation and then assume a particular coupling between phase and amplitude that eliminates the nonlinearity. What seems odd at first is that h appears when the two equations are combined even while they are still classical, although it takes on the familiar quantum role only when the resulting equation is linearised.

The point is that there is a whole family of possible wave equations one can derive from Hamilton–Jacobi, but how complex their properties are – and whether they are classical or quantum-like – depends on assumptions about the phase–amplitude relationship. This makes quantum mechanics seem less like a break from the classical past and more like a particular extension of it. That chimes with other recent work,3 and seems to imply that the quantum world is not necessarily as weird as all that.