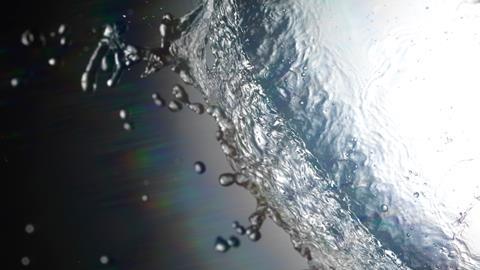 For the first time, scientists have imaged and measured a fundamental but fleeting step in water ionisation – the creation of the hydroxyl–hydronium complex OH(H3O+), a radical–cation pair – before it separates a hundred quadrillionth of a second later.

Water ionisation is a process that features in countless chemical reactions, with key roles in everything from radiotherapy to the corrosion of stored nuclear wastes. Understanding the details of water ionisation is critical to understanding the many processes that follow from it, says Matthias Ihme at Stanford University, US. Ihme led the study together with Ming-Fu Lin and Xijie Wang from the SLAC National Accelerator Laboratory in California.

The team used SLAC’s megaelectronvolt ultrafast electron diffraction instrument to generate an electron beam aimed at a sample of liquid water. While the sample is heated and ionised by high-energy laser pulses the instrument takes snapshots of the diffraction patterns that result from the electrons scattering off the molecules as they are being ionised.

This allowed the researchers to measure extremely tiny changes in the bonds between the sample’s hydrogen and oxygen atoms, something that couldn’t be determined by x-ray spectroscopy instead. ‘Hydrogen is a very small atom and it is extremely difficult to measure with x-rays,’ Ihme says. ‘The benefit of this electron diffraction system is that we can actually examine hydrogen.’

The snapshot images show the hydroxyl–hydronium pair only lives for around 100 femtoseconds, forming about 140fs after a sample is ionised and dissociating into separate hydroxyl radicals and hydronium cations within 250fs. This is faster than one of the fastest light-induced biochemical reactions, the vision protein rhodopsin’s photoisomerisation (200fs).

The results verify what was until now only a theoretical description of the radical–cation complex predicted by molecular dynamics simulations. ‘It’s always quite exciting to see when theory is validated,’ Ihme says.

While the electron diffraction method allows finer spatial resolution than x-ray methods when probing molecular processes, it’s not as good at resolving very small time periods, explains physicist Linda Young of the University of Chicago and the Argonne National Laboratory in the US. In a study published last year, Young and her colleagues used x-ray spectroscopy to study the H2O+ ion created during water ionisation, when a charged particle first hits a water molecule and knocks free an electron. ‘The combination of x-ray spectroscopy and electron scattering data would provide a stringent test of theories,’ she says.

Physical chemist Ali Hassanali of the International Center for Theoretical Physics in Trieste, Italy, says it will now be interesting to use electron diffraction to study difference in water ionisation under conditions other than in pure water, such as at an interface between water and another material. ‘I think it sets the stage for future studies in more complex conditions,’ he says.