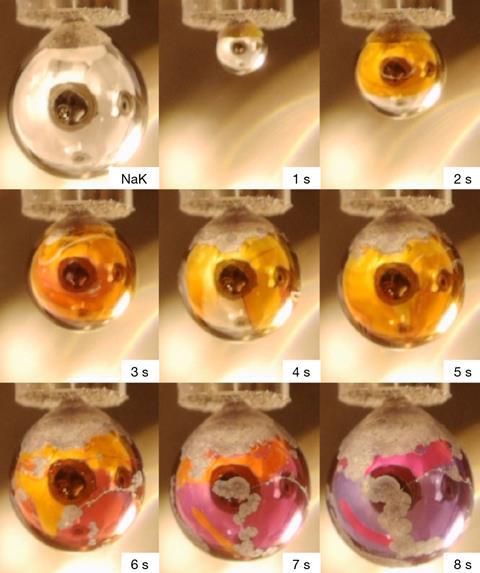 As soon as water vapour is added to the vacuum chamber, the sodium–potassium droplet turns gold as the water metallises on its surface. Increasing electron localisation after a few seconds turns the droplet purple

Researchers have created a transient version of metallic water – something that has been predicted to exist only under the crushing pressure inside giant planets and stars – at very low pressure by doping it with electrons from a liquid alloy.

At intense pressures, water could become metallic as its electronic orbitals are literally crushed together. Such metallisation may help explain the magnetic fields of planets like Uranus and Neptune. But creating it on Earth has so far been impossible as it requires pressures currently inaccessible in the laboratory.

In principle, any insulator – such as pure water – should become metallic at sufficiently high pressure. ‘The valence electrons of each individual water molecule will become collective electrons belonging to the whole material – you create a plasma essentially,’ explains Pavel Jungwirth of the Czech Academy of Sciences in Prague, who led the study.

Simulations predict that for water this requires about 50 million atmospheres of pressure. The researchers therefore decided to dope the material like a semiconductor. ‘I can think of only one way to massively dope water with electrons, and that’s dissolving alkali metals.’ But this reaction is usually too exothermic and abrupt. ‘A tiny technical issue is that it explodes,’ says Jungwirth.

The researchers therefore did the reverse: adding water to a liquid sodium–potassium alloy. They dripped this alloy slowly from the tip of a nozzle into a vacuum chamber containing tiny amounts of water vapour – around 10-7 atmospheres.

As water is adsorbed onto the droplets’ surface, two things occur: electrons from the alkali metal are drawn into the water, and the water reacts with the metals to form hydroxides. However, as electrons are much lighter and more mobile than atoms, their solvation happens much faster than the chemical reaction. The team could therefore study electron-doped water that persisted for several seconds. 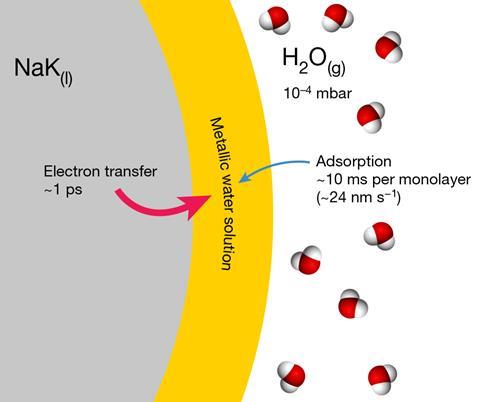 Because the electrons are light and mobile, they are drawn into the water layer before the the hydroxyde-producing reaction between the alkali metals and the water can take place

The researchers observed that, as soon as droplets form, they almost immediately turn gold, bronze, purple and finally, after around eight seconds, white. The golden colour suggests plasmon formation – which only happens in metal-like materials that contain a sea of free electrons. Jungwirth believes the subsequent colour changes to bronze and purple are likely due to increasing electron localisation as additional water reduces the degree of doping. The white colour is due to the eventual hydroxide formation. Additional spectroscopic investigations using synchrotron x-ray photoelectron spectroscopy confirmed the findings.

Physicist Marius Millot of Lawrence Livermore National Laboratory in California, whose laser shock compression experiments provided evidence for superionic ice on Neptune and Uranus, is impressed. ‘It’s really cool,’ he says. ‘I would have never thought that such an experiment was even possible…I had to read one caption three times to check that it was really lasting seconds. In our dynamic compression experiments, you usually do nanosecond-timescale experiments or, if it’s really long-lived, maybe it’s a microsecond.’

While Millot agrees with Jungwirth that the doped state provides no direct information about the predicted high-pressure metallic ice, he adds: ‘Because the sample lasts for seconds…maybe we should shock compress it with a laser and see what sort of weird state we can create.’