A sunlight-harvesting graphene film can produce steam without boiling the water. The material, which has been made by Chinese scientists, could convert sea or wastewater into drinking water in places where fuel or access to electricity is limited.

Desalinating seawater to make drinking water usually means boiling it, and then collecting and condensing the steam. Heating water to its boiling point, however, requires a great deal of energy either in the form of fuel or electricity. There are solar stills that desalinate water using only sunlight, but they’re slow and not always efficient enough to provide sufficient drinking water for a person’s daily needs.

Xianbao Wang and colleagues from Hubei University have now made a graphene aerogel film capable of producing water vapour at room temperature using only sunlight. The aerogel floats on the surface, where it heats up only a small section of the water column, ‘while the temperature of the bulk water is far below the boiling point’, as Wang explains. 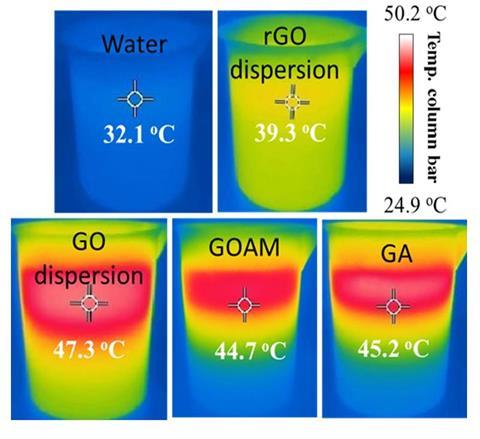 While other steam-generating materials are based on expensive raw materials such as gold, the basis for Wang’s aerogel is powdered graphite – a cheap and widely available resource. ‘In the context of solar steam generation, the current work has a major contribution in fabricating an efficient sunlight absorber in a simple method, which is scalable,’ comments Satoshi Ishii, a photonics nanoengineering researcher at the National Institute for Materials Science in Japan.

However, if the material is to be used in a desalination device, Wang’s team will need to improve the material’s toughness – it is easily broken when picked up. ‘I do not see fundamental difficulties in bringing the current technology into real-life applications, although much more feasibility studies should be done,’ adds Ishii.