Solar steam generator to be trialled for chemical production in Mexico 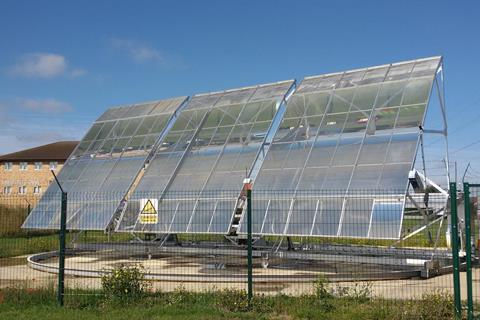 Super-heated steam generated by plastic lenses focusing the power of the sun’s rays is to be trialled for sustainable chemicals production in Mexico. The team backing the project hope it will help provide low cost energy for the country’s chemical and manufacturing industries.

The technology is based on a prototype that was constructed in Peterborough in the UK, as part of an academic–industrial partnership between researchers at Queen Mary University of London and Larkfleet. Its developers say that although the current prototype functions well, they hope it will perform much better in Mexico and other ‘sun belt’ regions, which receive far more sunlight. Backed by funding from the UK government’s Innovate UK initiative, they are collaborating with the National University of Mexico and the company ITEnergy to establish the technology there.

John Squire, manager of the solar steam project at Larkfleet, explains that the solar concentrator uses plastic Fresnel lenses – which are thinner and flatter than conventional lenses of equivalent power – to focus the sun’s rays onto a central absorber. The absorber has a hollow pipe running through it containing water that is heated to produce steam.

‘That steam can then be used in chemical processes, [like the production of] pharmaceuticals and textiles,’ says Squire. ‘It can be used for heating, for cooling, for water treatment. It’s a versatile system.’

The UK prototype system currently generates steam at temperatures ranging from 80°C to 250°C, which would be suitable for various ‘medium heat’ industrial processes. With the Mexican system, the aim is to develop something with a modular design, that could be scaled up or down according to what the steam is being used for. Squire suggests this could be especially useful in Mexico to provide lower cost on-site steam generation for heat processing within the chemical industry.

As plastic lenses are lighter and easier to transport and manufacture than conventional materials used in solar devices, the cost of producing energy in this way could be comparatively low. ‘Fresnel lenses have been used for different purposes, but never in a way that we’ve now [shown]. Nobody’s ever come up with a system like we have,’ says Squire.

The pre-commercial prototype in Mexico – which builds and improves on the UK design – is still under construction. After it has been through testing and further development, the ultimate aim is to design a final product that could be marketed through partners in Mexico, and ultimately in other sun belt countries.

‘We’re just seeing exactly what we can do, how we can do it and what design of system we need,’ says Squire. ‘The whole thing hinges really on the requirements of the market.’

The project is expected to run for another two years.