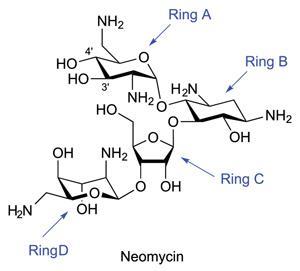 A fluorinated analogue of the naturally occurring aminoglycoside neomycin – well known as an over-the-counter ointment for minor skin abrasions – could lead to a range of much-needed antibiotics in the arms race against aminoglycoside resistant bacteria.

Aminoglycosides have proven indispensable in the treatment of hospital acquired bacterial infections that are particularly difficult to fight in patients suffering from cystic fibrosis and immunodeficiency related illnesses. By binding tightly to a bacterium’s ribosomal RNA (rRNA) in a position known as the A-site, the aminoglycosides disrupt the biosynthesis of proteins necessary for growth, resulting in the bacterium’s death.

However, extensive clinical use of aminoglycosides over the decades has led to resistant bacteria which release a range of aminoglycoside-modifying enzymes (AMEs) that change the amino (–NH2) and hydroxyl (–OH) functional groups on the molecule, rendering them ineffective. By acetylating the amino groups or phosphorylating the hydroxyl groups, the AMEs change the polarity of the aminoglycosides which reduces their cellular permeability. Existing responses have been problematic: one approach has been to completely remove one or more of the hydroxyl groups to avoid phosphorylation, however this changes the fundamental properties of the molecule, such as the pKas of nearby amino groups, which can lead to side-effects in patients.

To address this, Stephen Hanessian, and co-workers at the University of Montreal, Canada, and Sophia University, Tokyo, Japan, replaced the 4’–OH group in the A ring of neomycin with an axial fluorine atom via a multistep synthesis to create a powerful analogue which has been shown to evade the deactivating AMEs in in vitro tests.

Shahriar Mobashery, a bacterial resistance specialist at the University of Notre Dame, US, believes the work confronts an important clinical challenge. ‘The team have re-engineered an important aminoglycoside that had faced obsolescence. This work creates an opportunity to explore new structural space in aminoglycoside chemistry’. 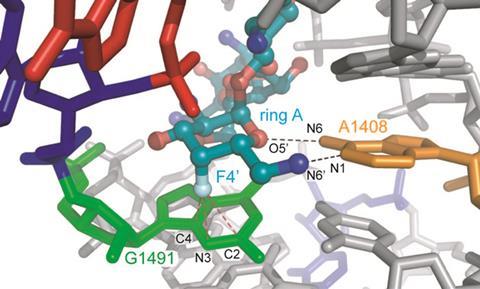 X-ray crystallographic techniques have enabled the group to shed light on the binding of the aminoglycoside with residues in the rRNA A-site. Hanessian tells Chemistry World this should boost understanding of interactions that are important for arresting bacterial growth, to help design structures with greater residence times.

The team is presently studying the interactions of non-aminoglycoside based fluorinated compounds to further appreciate how these molecules interact with residues in the A-site.