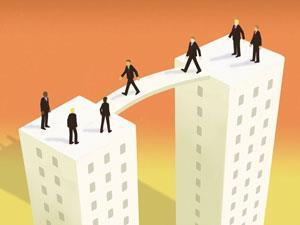 An influential thinktank has proposed cutting the UK tax credits companies receive for research and instead channeling the money into applied research centres. In its report on funding higher education, the Institute for Public Policy Research (IPPR) argues that these centres would ‘bridge the gap’ between discovery and commercial exploitation. ‘The centres would have a regional focus with a specific mission to engage the local economy, for example through the supply chain,’ says co-author Rick Muir.

Applied Research and Innovation Centres would be a rethink of the newly created Catapult centres, set up by the government to bring new technologies to market. Modeled on Germany’s Fraunhofer network, Catapults focus on seven areas including cell therapies, offshore renewable energy and high value manufacturing. The IPPR says Catapults aren’t tasked with rebalancing the economy, and only have limited involvement with smaller companies. It wants to boost funding from the current £50 million to nearly £1 billion a year, to achieve ‘critical mass in research expertise and business capability’. The new centres would help businesses to share R&D costs, and access skilled researchers and expensive equipment.

On top of the extra £1 billion, the IPPR argues that the existing £4.6 billion science and research budget should continue to be ringfenced – and sustained through till 2017–18, when the deficit is forecast to be eliminated. Even this means a real terms cut in funding, so it wants a commitment that the science budget will be increased annually above inflation for the following 10 years after the deficit is cleared.

‘We need top quality blue skies research – and this needs to be funded otherwise nothing is coming down the pipeline’, says Mike Ferguson, who leads the drug discovery unit at Dundee University, which puts academics alongside industrialists. ‘We also need a translational engine to take discoveries out into the commercial world: anything that bridges these is to be welcomed.’ He stresses that it’s important for industry and academia to learn to speak the same language.

Presently, companies can claim tax credits for research expenditure, which Muir says is ‘an indiscriminate way of spending large amounts of public money’. For example, half of the tax credits, around £400 million, go to city business firms, doing research on things like software for derivatives: ‘not what you’d think of as scientific research’. Revenues and custom’s own analysis before the financial crisis, suggested this tax incentive didn’t necessarily influence a company’s decision to do research in the UK.

Halving the tax credits available under the ‘patent box’ scheme, which came into force this year, would raise another £500 million. The scheme reduces the rate of corporation tax that companies pay on income from UK registered patents to 10%. The IPPR argues they should pay 15%. It also proposes using funds from the renegotiation of the telecoms spectrum, which the telecoms industry says would raise about £300 million, bringing the total budget for the new applied research centres to around £900 million a year.

Thinking outside the box

The new patent box has already come in for a lot of criticism, but Steve Elliot of the Chemical Industries Association says the tax break is encouraging companies to set up production in the UK, and ‘already producing significant supply chain benefits’. He cites the importance of the measure in GlaxoSmithKline’s decision, earlier this year, to invest £500 million in Cumbria and Scotland.

Entrepreneur Ian Ritchie, who co-authored a report for the Scottish government on using Scotland’s science base to boost the economy, believes the IPPR proposals are ‘unrealistic, because the Treasury doesn’t like hypothecated taxes’. £50 million for Catapult centres ‘is a lot of money’, but he adds that it’s worth lobbying for tax credits for less wealthy regions.

Charles Levy at the Work Foundation’s Big Innovation Centre also questions whether £1 billion can be meaningfully spent ‘as it takes time to build up capabilities’. He thinks the government will only just manage to spend the money allocated to the Catapult centres. Levy does welcome the idea of refocusing money from tax credits, but cautions that in spite of their flaws ‘you wouldn’t reduce [them] overnight and you’d have to be very clear about how you communicate why you are shifting the funding’.

Of the seven Catapults, which will be up and running by the end of the year, four are based in London and Oxford. Muir says that some funds ought to be directed away from the ‘golden triangle’ of Oxford, Cambridge and London. He’d advocate setting up regional spinoffs, in a similar manner to the Fraunhofer model. Ferguson is more sanguine: ‘Site centres where they deserve to be and don’t worry too much about geography. Science is all about excellence.’

Reform of the current student funding system, which the IPPR says is unsustainable. It estimates that almost 40% of loans will never be repaid, which could force short-term cuts in science spending

Bring back polytechnics. Polytechnic status would be a mark of vocational excellence