Researchers in China have successfully used in operando imaging to watch a methanol oxidation reaction. The experiment led them to uncover an unexpected mechanism through which the reaction generates the unwanted byproduct formaldehyde that could help scientists design more efficient fuel cells.1

Liquid methanol powers direct methanol fuel cells by oxidising methanol to carbon dioxide on a platinum or ruthenium catalyst. The reaction releases electrons, which travel around an external circuit to provide power, and protons, which travel through the electrolyte to the cathode, where they react with oxygen to form water. Direct methanol fuel cells run at lower temperatures (60–130°C) than other kinds of fuel cells, and by using liquid methanol as a fuel, allow for quick refuelling, and easy transportation and storage. However, their low efficiencies are holding them back from widespread use.

Incomplete methanol oxidation, which results in unwanted byproducts like formaldehyde, is behind some of these inefficiencies. Exactly how the reaction generates formaldehyde has been subject to debate so, inspired by their experience using surface plasmon resonance imaging (SPRi) to study the photocatalytic activity of single CdS nanoparticles,2,3 Wei Wang and his team at Nanjing University used the technique to observe methanol oxidation.

Surprisingly, a wave-like burst appears in the solution surrounding the platinum disk

The team mounted platinum nanoparticles to catalyse the reaction on a gold film-coated glass coverslip, which they mounted onto a prism. They illuminated the nanoparticles through the prism using monochromatic light, at an angle greater than the total internal reflection angle. Next they applied a potential to the reactants in the presence of an electrolyte and collected photographs of the system at regular intervals. Initially, they recorded a baseline with no applied potential for 30 seconds. Then they applied a potential to the disk in the presence of an electrolyte for 60 seconds before turning it off.

What they saw took them by surprise. Shortly after the potential went off, a product with a much higher refractive index appeared and moved away from the disk in a wave-like burst. ‘We were expecting to see a slow release of formaldehyde,’ says Wang.

Instead, their results suggest that the formaldehyde burst is due to electrochemical reactions in the pre-oxidation state and removing the potential triggers its production. Formaldehyde forms through both electrochemical and chemical steps but the SPRi images show that the majority of it is produced under open-circuit conditions, rather than as an intermediate species during the continuous electron transfer processes to make carbon dioxide. ‘The details regarding the production kinetics, potential dependence and the spatial distribution of [formaldehyde] were largely unknown before the present work,’ Wang adds. After removing the potential, several seconds pass before the formaldehyde burst, because the reaction needs fresh platinum atoms. This is characteristic of self-catalysis. 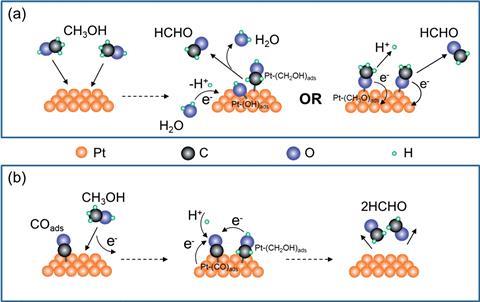 In operando imaging expert Andrew Beale, from University College London, UK, believes this could be viewed as a defining experiment. Regarding the mechanism, Beale says it is ‘very difficult for anybody to conclude anything else’ and should ‘probably draw a line under any further discussion on the subject’.

Wang’s team now plan to use the in operando technique to screen potential methanol oxidation electrocatalysts.