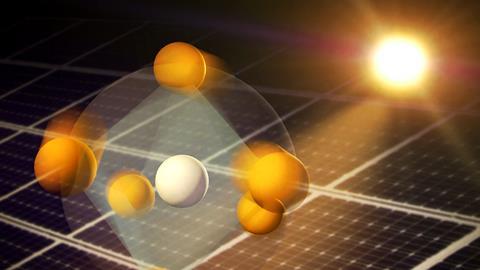 Electron camera may help uncover why perovskites are efficient light-harvesters

A ‘molecular movie’ has revealed how perovskite solar cells respond to light. The work could help to explain why these structures are so adept at converting light into electricity.

Silicon solar devices remain the dominant market force in photovoltaics, accounting for around 94% of device production in 2016. Although other cells have failed to surpass silicon’s performance, perovskites offer a promising alternative.

Since their discovery in 2009, efficiencies for the fledgling device have continued to climb, moving from 14% to 20% in under two years. Yet, unlike its silicon counterpart, surprisingly little is known about how the metal–organo–halide structure converts light into electricity.

‘The physics and chemistry that underlie how a silicon solar cell works are well understood,’ explains Aaron Lindenberg from Stanford University, US, whose team carried out the research. ‘In contrast, basic aspects of the unique functionality of the hybrid perovskites are not.’

Even so, physicists understand the overarching process. Just like a silicon device, a perovskite thin film, typically methylammonium lead iodide (MAPbI3), is sandwiched between two charge extraction layers. Upon exposure to light, holes and electrons generated in the perovskite lattice move towards the outer layers, creating an electric current. But no one understands how the lattice responds to light and, ultimately, why it’s such an efficient light harvester.

To make matters more difficult, all of this takes place in a matter of femtoseconds (10-15s). ‘It’s like trying to understand how a complex machine works without being able to see the underlying parts because they are too small or too fast,’ laments Lindenberg.

Lindenberg’s team decided to put this process under the spotlight at the Stanford Linear Accelerator Center, home to one of the world’s fastest ‘electron cameras’. The group first fired a 40fs laser pulse at a 40nm-thick MAPbI3 film to excite the perovskite. Following this, they fired an electron beam at the structure to obtain a diffraction pattern.

By delaying the time between beams, the group could collect a series of electron diffraction snapshots and ascertain how the perovskite lattice deforms under light. ‘Our measurements indicate that the perovskite structure is deforming in a fairly unusual and unexpected way,’ comments Lindenberg.

Perovskites have a similar structure to calcium titanium oxide, with lead atoms sitting at the centre of iodine octahedra. The methylammonium atoms occupy the spaces between these octahedra. Within 10 picoseconds (10-12s) of light exposure, the iodine atoms move around the central lead atoms, while maintaining a constant distance from them. ‘One can picture the iodine atoms moving on the surface of a sphere around each lead,’ says Lindenberg.

Iodine atoms, which surround lead atoms in a perovskite solar cell material, respond to light in a surprising manner. Within 10 trillionths of a second after a light pulse, iodine atoms rotate around every lead atom as if they are moving on the surface of a sphere with the lead atom at the centre. These motions could potentially explain the material’s high efficiency in converting light into electricity.

It remains to be seen how these atomic rotations lead to charges flowing freely through the film and explain perovskites’ high efficiencies. Nevertheless, Lindenberg hopes the electron camera will go on to provide a ‘new, fundamental understanding of how these materials work’.

The technique may also shine a light on the perovskite cells’ stability, which will ultimately dictate whether the industry adopts the device, according to Lindenberg. It’s a known issue with the technology, one that has somewhat stymied its path to commercialisation in recent years.

Eva Unger, a photovoltaics researcher from Lund University, Sweden, and Helmholtz Zentrum Berlin, Germany, says that the camera provides a unique way to probe these materials. ‘Understanding the particular light–matter interaction of photovoltaic materials is of paramount importance,’ Unger says. ‘These experimental results allow a glimpse into the complex dynamic response of metal halide perovskites upon absorption of photons.’