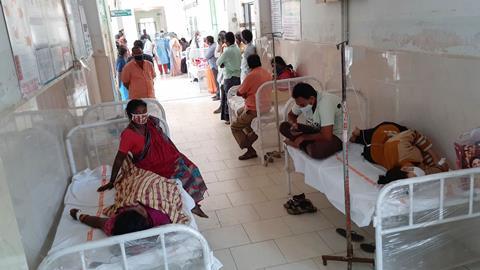 An unknown illness that has put hundreds of people in hopsital in India’s southern Andhra Pradesh state has left doctors and experts baffled.

One person has died and over 600 fell ill as the disease swept through the town of Eluru, home to 200,000, on 5 December. Most reported similar symptoms – such as seizures, headaches and vomiting. A week after the incident, no new cases were reported and most of those taken ill have been discharged from hospital.

A multi-disciplinary panel of the state government has been tasked with investigating the cause of the illness. A central government team was also sent to investigate.

Conflicting findings to date have made it difficult to untangle exactly what caused the illness. Experts from a range of institutions have confirmed the presence of lead and nickel in blood samples, as well as in milk and vegetables. Scientists at a number of other institutions believe the outbreak was caused by organochlorine pesticide residues in food. Elevated levels of mercury have also been found in groundwater, compared with surface water, and in food too.

While the official investigation has stated that it had found no evidence of contamination of drinking water, others disagree. A private lab found raised levels of pesticide residues in drinking water supplied to certain localities – DDD at thousands of times the permitted level, as well as methoxychlor and the herbicide alachlor. DDT levels were also recorded at 14.16mg/l against permissible limits of 0.001mg/l. The banned pesticide endosulfan was also found in some blood samples, as well as DDD, a metabolite of DDT. ‘DDT is banned in agriculture, but the health department still allows its use,’ explains Shashi Vemuri, a former entomologist from the Professor Jayashankar Telangana State Agricultural University, Hyderabad.

‘The presence of mercury in rice at elevated levels is alarming,’ Vemuri adds. ‘Also, the official reports do not disclose the name and quantity of pesticides. High levels of pesticides target the nervous system.’

The initial reports by doctors and researchers found lead and organochlorine compounds in blood samples and organochlorine and organophosphorus in serum samples. Farmers in the region are known to use higher levels of pesticides on crops and vegetables than the rest of the country.

Tharaknath Vemuri, former head of the neurology department at the Guntur Medical College, Andhra Pradesh, said the symptoms of lead or mercury poisoning are not as abrupt as those seen in these patients. ‘In the absence of any specific treatment, such a rapid recovery is also very unlikely. As the water and blood samples tested by reputed institutes have shown pesticides residues, it is possible that the symptoms could be because of pesticides.’

The official report from the 14 institutions is yet to be made public. Experts, however, said a long-term study of food and water will be required over the next few months to ascertain the exact cause of the illness.