Funding confirmed for another 19 doctoral centres

Extra centres will provide industrial training for a further 900 postgraduates 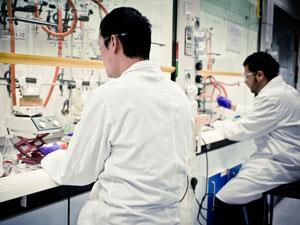 David Willetts, the UK’s science minister, has announced an additional £40 million to fund another 19 centres for doctoral training (CDTs) in the UK. The extra money came from further industry support and academia, as well as ‘renegotiating’ some university contracts.

This news comes shortly after the Engineering and Physical Sciences Research Council (EPSRC) announced which institutes had won funding to host CDTs first proposed back in January 2013. In this round, £350 million was available for CDTs and 72 centres, covering a wide range of areas of deemed to be ‘vital to economic growth’ by the EPSRC, were eventually funded.

This is the second round of funding for CDTs, after the concept was first rolled out in 2008. CDTs differ from a conventional postgraduate degree, such as a PhD, as the students start at the same time and work together in a cohort, allowing them to learn from each other. These cohorts also receive multi-disciplinary training and a programme of taught coursework as part of a scheme that aims to produce graduates with the skills that are in demand in industry.

‘The government will be investing in a further 900 students through an additional 19 centres for doctoral training, bringing our total investment in CDTs to £390 million,’ Willetts said in a statement. ‘In addition, universities, industry and other charitable partners will be adding a further £124 million to support the training of tomorrow’s scientists and engineers. The combined public and private investment amounts to £764 million.’

Panos Tsakiropoulos, a professor of metallurgy at the University of Sheffield, UK, leads one of the 19 CDTs that secured funding – his CDT was one of those set up in 2008. He says he is still waiting to find out how much money he will receive, as cuts were made to other CDTs to help fund these additional centres. Tsakiropoulos says CDTs work well for today’s graduates: ‘Undergraduate courses do not really provide the depth and the breadth that is required by industry.’ CDTs provide more training and industrial experience, he adds, which give graduates the skills they need to find a job outside of academia.

However, the targeting of specific research areas for funding has led to the EPSRC coming in for some criticism. Tsakiropoulos says that some of this criticism is fair, as he thinks some CDTs are extremely specialised and may have trouble attracting students, who in turn may have difficulty finding work after they graduate. He says that his CDT has proved particularly popular with chemistry graduates, as metallurgy is a skill that is in short supply in the UK and there are not enough chemical sciences jobs for the number of graduates out there.