Scientists in the US have developed a compound that exploits bacteria’s need for iron to trick them into transporting an antibiotic agent into their cells via their iron uptake and metabolism pathway. Galbofloxacin contains gallium, which ‘looks like iron but cannot be used by the bacteria,’ says PhD student Apurva Pandey, who led the research in Eszter Boros’s group at Stony Brook University. ‘We essentially have a combination therapy, a dual approach of having the gallium present and the antibiotic [meaning] we can go after two mechanisms at once,’ explains Boros. 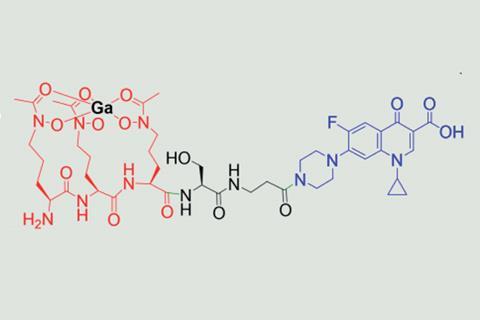 Antibiotic resistance continues to be a major challenge in healthcare settings. Experts suggest that yearly deaths from bacterial infections could rise to 10 million by 2050. The emergence of bacterial strains such as methicillin-resistant Staphylococcus aureus, demonstrate the need for new approaches to tackling these infections.

In a previous study, Pandey, Boros and their colleagues constructed a conjugate consisting of three parts – a gallium-co-ordinating siderophore, a non-cleavable β-alanine linker and the antibiotic ciprofloxacin.2 The natural product albomycin served as inspiration for the conjugate. Produced by Streptomyces bacteria, albomycin is a sideromycin (a siderophore attached to an antibiotic) and displays good potency against a range of bacteria. However, the team’s initial conjugate performed no better than ciprofloxacin on its own.

Now, by introducing an enzymatically cleavable serine linker in addition to β-alanine, the team has made a compound that is better at releasing its antibiotic payload. Galbofloxacin displayed activity against S. aureus an order of magnitude higher than ciprofloxacin and was more potent than a metal-free version of the compound. 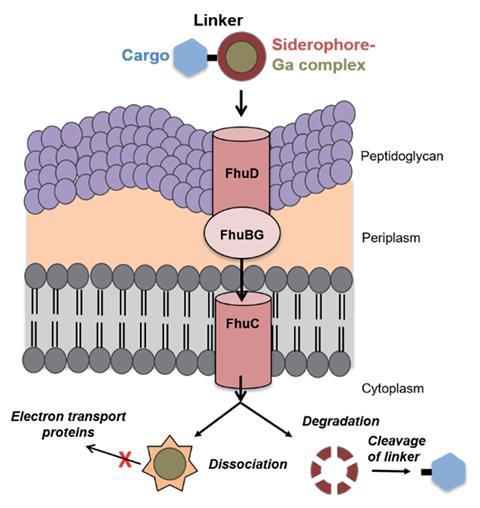 Including a siderophore meant the team could swap out nonradioactive gallium for the radioactive isotope gallium-67. Pandey says that ‘having one conjugate to both image and treat a bacterial infection is something, as what’s currently used [to diagnose] is super invasive.’ Gallium-67 allowed the team to track its uptake in vitro and demonstrate that it selectively accumulated at the site of infection. ‘We’re not approaching this from a microbiology background, so we use imaging and tracing tools to better understand how uptake works,’ adds Boros.

‘This triple whammy of bacterial accumulation, toxic effects in cell, and imaging of infection, is bad news for pathogens and an urgently-needed advance in antibiotic design,’ explains Anne Duhme-Klair, an expert in siderophore–antimicrobial conjugates at the University of York, UK. ‘In the future it would be interesting to investigate how the incorporation of gallium affects the development of bacterial resistance.’