Could this study prompt drug developers to rethink their reluctance to making metal-based pharmaceuticals? 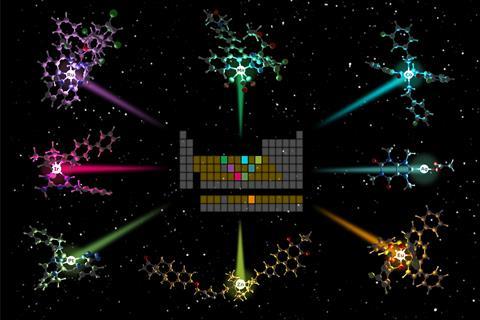 Researchers have evaluated the antimicrobial activity of 906 metal-containing compounds submitted to the Community for Open Antimicrobial Drug Discovery initiative. The study recorded a surprisingly high hit rate for metal containing complexes compared to organic molecules, underlining their potential in the fight against antibiotic resistance.

The Community for Open Antimicrobial Drug Discovery (CO-ADD) is a free antimicrobial screening service at the University of Queensland in Australia. 280 academic chemistry laboratories have so far submitted over 295,000 compounds to the project.

Conventional approaches to antibiotic development involve modifying existing organic molecules with known antimicrobial activity. ‘Our hypothesis was that most commercial and pharmaceutical compound libraries are now being curated so they contain compounds that comply with rules to ensure that they are drug-like. The problem is that most current antibiotics don’t follow those rules, so if you restrict the compounds you test you may be excluding the compounds most likely to have activity,’ comments CO-ADD member Mark Blaskovich.

Metal complexes can do things that organic molecules can’t

Frei says the array of different structures and elements in the hits is ‘encouraging as it tells us there are potentially many interesting compound classes out there’. ‘We also found that the precise structure of the complexes can have big influences on their activity. For example, small modifications on the ligands of the iridium complexes could completely nullify their antimicrobial activity or turn them cytotoxic. This proves that it is not simply the metal responsible for the activity but that the combination of select metals with specifically designed ligands is crucial. In short, the metal complex is more than the sum of its parts.’

‘Future structure–activity studies of the identified active metal-based compounds will enhance our understanding of what is necessary to alter bacterial integrity and identify new strategies to fight bacterial resistance,’ comments Andreea Schmitzer, whose research at Montreal University in Canada combines organic, bio-organic and supramolecular chemistry. 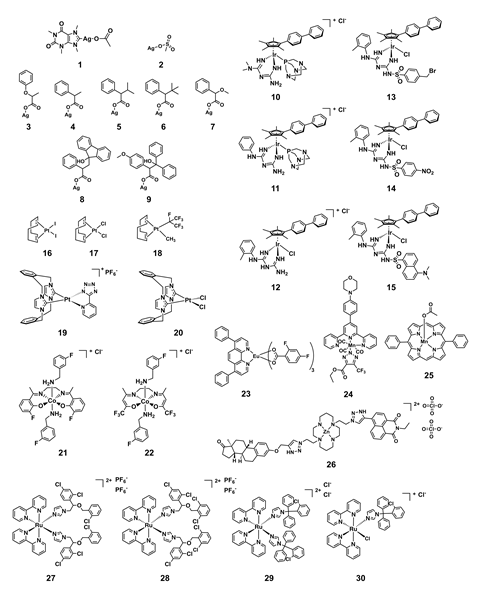 How metal complexes behave in the body is less well understood than their organic counterparts, and the fundamental toxicity of metals is a deterrent to pharmaceutical companies. ‘These results also raise a lot of questions regarding the toxicological and environmental effects of direct and indirect exposure to metal-based antimicrobial compounds, in particular some environmental microorganisms may be vulnerable to metal poisoning,’ adds Schmitzer.

‘As far as I am aware no major pharmaceutical company is actively looking at metal complexes,’ says Frei. ‘In my opinion this largely stems from the common notion that metals and their complexes are just generally toxic, and one should avoid them altogether. While it is true that some transition metals can be toxic, this depends very much on the form of the metal. The oxidation state of the metal, the ligands coordinating it, the dose and route of administration all have a big influence on whether or not a compound will do harm, in many ways similar to organic compounds, that can be toxic if they have certain functional groups attached to them.’

‘Most organic drug candidates are restricted to maybe 10 different elements, whereas with metals you have almost 50 extra elements to play around with, increasing the possibilities exponentially,’ adds Frei. ‘Metal complexes can do things that organic molecules usually can’t do such as ligand exchange, catalysis in cells and generate reactive species. These options open up pathways to new mechanisms of action, hopefully making it harder for bacteria to develop resistance against these compounds.’

The team encourages chemists to submit more metal compounds to the CO-ADD for screening: A larger sample size would clarify which metals and ligands are worth pursuing.